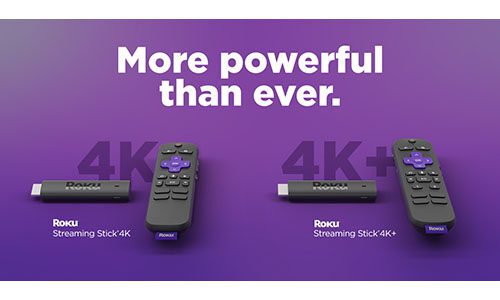 Roku states that its latest streaming products provide users with a choice of affordable small-form factor streaming devices. Additionally, the company also announced its Roku OS 10.5 operating system that includes updates to get users to their content as quickly as possible, and it also provides voice control improvements.

The Roku Streaming Stick 4K is said to be faster than previous versions of the product. It boots up 30% faster to enable smooth streaming in 4K, along with Dolby Vision and HDR10+ HDR, and it incorporates a newly redesigned Wi-Fi receiver that is said to deliver up to 2x faster wireless streams.

The company emphasize that it has also updated its Roku Ultra LT with a faster processor, more storage and a new Wi-Fi radio that offers up to 50% more range than the previous model. Other features the new Ultra LT model offers includes Dolby Vision HDR, Bluetooth for audio streaming, and built-in Ethernet support.