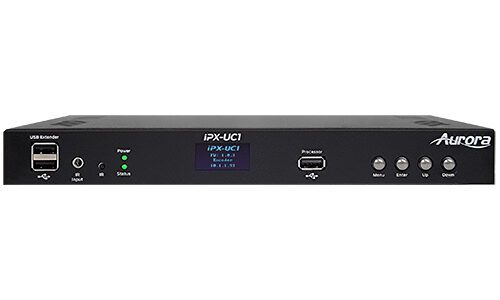 The IPX-UC1 from Aurora offers the ability to stream 1G, 10G and 10/100 at the same time in both directions, according to the company.

Aurora Multimedia says that its new transceiver is capable of simultaneously encoding and decoding over a single cable without any latency and compression. The IPX-UC1 is capable of streaming 1G, 10G and 10/100 at the same time in both directions, and it is compatible with codecs such as H.264, H.265 and NDI.

Inside the transceiver the company employs a Pentium class processor with 1TB SSD to help the device support Zoom, Teams, Web Ex and other unified communications (UC) platforms.

According to the company, the IPX-UC1’s internal processing also enables the transceiver to support optional Wi-Fi, which Aurora says will be a future update for BYOD (bring your own device) applications such as connectivity to laptops and smart devices.

The unit’s input card slots offers three choices depending on the application. In addition, the SDVoE output and processor output can be sent to either of the product’s two external HDMI outputs or to the SDVoE and Processor inputs.