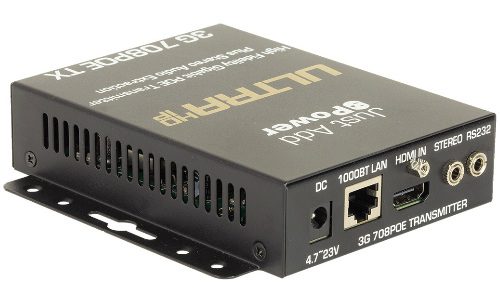 Like its predecessor, the 708POE distributes video resolutions up to 4K Ultra HD with no latency over a single Cat 5e cable.

Just Add Power has announced the release of its 3G 708POE transmitter. Making its debut at ISE 2020 in booths 1-Q120 and 1-N134, Just Add Power says the transmitter allows integrators to cost-effectively add a stereo analog audio output to their 3G Ultra HD over IP systems.

“By extracting audio from sources and outputting it via a 3.5 mm port, the 708POE makes it simple for integrators to incorporate two-channel stereo receivers and amplifiers into their J+P systems,” says Taft Stricklin, sales team manager at Just Add Power. “Offering an upgrade to our popular 707POE, the new transmitter delivers this additional functionality at a groundbreaking price.”

Like its predecessor, the 708POE distributes video resolutions up to 4K Ultra HD with no latency over a single Cat 5e cable. The unit supports HDCP 2.2, HDMI 2.0, HDR, HDR10, and all lossless audio formats, including Dolby Atmos.

Video wall functionality is built-in for displays installed in portrait and flipped configurations, as well as image push, pull, and pop features.