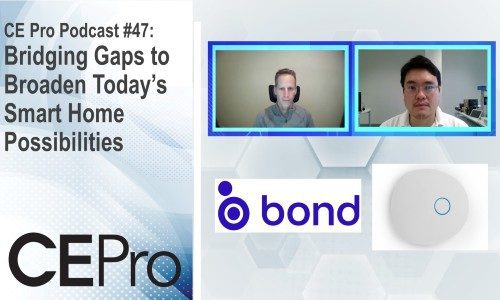 Interested in a way to make smart homes even smarter? Need a method to integrate existing amenities like ceiling fans, motorized shades and fireplaces into an automation system without replacing them?

A company called Olibra may have just the solution for you, and CEO Zohar Shinar joined this week’s episode of the CE Pro Podcast to tell us why custom integrators should be excited about the forthcoming Bond Bridge Pro.

Also joining as a guest is Alan Chow of Chowmain Software and Apps, which develops drivers to facilitate such integrations for smart home products with popular third-party systems – including Control4, Somfy, Elan, URC and RTI for the Bond Bridge Pro.

Chow, who came onto the CE Pro Podcast all the way from his native Melbourne, Australia, has experience with Olibra’s consumer Bond Bridge offering that preceded the professional installer Bond Bridge Pro version that will be available for the first time this month. Olibra launched in 2016 and came out with the Bond Bridge, which bridged RF to Wi-Fi control, in 2018.

Custom integrators who attended last fall’s CEDIA Expo Virtual show may remember Olibra not only from visiting its booth but from the Tech Bites competition, in which Shinar and seven other brands pitched judges on their innovative technologies and solutions.

The Bond Bridge Pro “hub” device connects RF remote-controlled appliances to IP, so they can then be commanded by control systems. The product will reduce installation time, provide additional control features that some wall-mount alternatives do not provide, save wiring and simplify the overall installation of the home system, Shinar says.

“[The Bond Bridge Pro] was designed with feedback we got from dealers using the Bond Bridge with Alan Chow drivers in automation systems, and we’re very excited about the launch,” Shinar says.

“After talking to multiple dealers, we realized they loved the idea of going into a job and connecting a lot of appliances without doing any wiring and without any workarounds – just use the [Bond Bridge Pro] hub. No need for line of sight, just learn the controls of those appliances.” 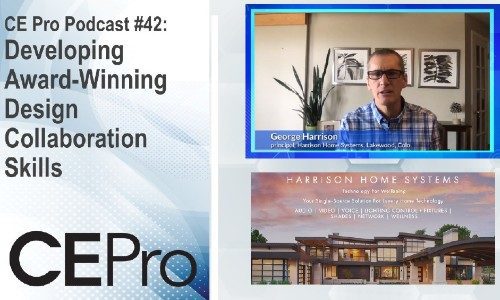 Shinar says key differences in the pro channel version that are lacking in the consumer model are robust IP connectivity and power provisions from PoE, which yield greater installation versatility. It also adds Ethernet, so overall it has much better range than the Bond Bridge, and product support is being expanded.

He adds the warranty has been extended to three years, and also expanding customer support to seven days a week so installers will have no worries about any troubleshooting.

With the Bond Bridge Pro becoming available to U.S. dealers in March, Shinar notes the product has signed on distributors Convergent Technologies and Entertaining Environments in Australia; Product Solutions Group in Canada; Elan Systems in South Africa; and V2D in Nigeria.

Learn much more about the product features, applications, integrations and more from Shinar and Chow in the video and audio files above. Find every CE Pro Podcast episode by subscribing to the CE Pro YouTube channel.