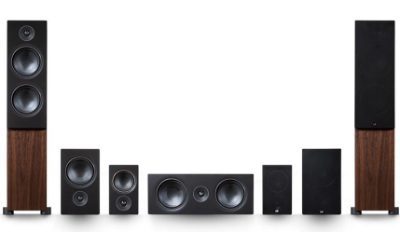 Since 1991, the PSB Alpha Series has provided music and home theater lovers a choice of reasonably priced loudspeakers that perform beyond their price class. At CES 2019, the newly redesigned PSB Alpha Series made its debut, featuring four models in either a walnut or black ash finish.

“The PSB Alpha speakers were among the most popular speakers we have ever made so we have had constant requests from the market to design an updated and improved range,” comments Paul Barton, founder and chief designer, PSB Speakers.

“However, by leveraging new materials and design techniques, as well as advanced manufacturing capabilities, these Alpha models are a substantial improvement over the original ones with respect to looks, performance and value.”

Working from a clean slate, the latest generation of Alpha speakers maintain the goal of providing affordable, high performing speakers, while now employing the benefits of increased design experience and newer materials.

The new Alpha P3 and P5 products are two-way bookshelf speakers, while the T20 floorstanding speaker adds another woofer and more cabinet volume without significantly increasing the speaker's footprint. The C10 center channel is designed for versatility through its ability to reproduce music, movie, and dialog-heavy content.

Related: Lenbrook, Parent of NAD and PSB, to Distribute DALI Speakers in the U.S.

At the heart of the new Alpha Series' performance are a pair of newly developed woofers—a 4.5-inch and a 5.125-inch—as well as a new 3/4-inch ferrofluid cooled Neodymium magnet tweeter.

The tweeter employs a waveguide on its front to match the response of the tweeter near the crossover point with the woofer to create a seamless frequency transition.

The tweeter is placed below some models, and through the use of a fourth-order Acoustic Linkwitz-Riley filter crossover network, the speakers minimize distortion even when they are played at high volume levels.

The speakers' enclosures feature a combination of wall thickness and bracing to control cabin resonances, and the internal dampening material was specifically developed for use with PSB's more expensive models.