Nielsen Data Shows Vinyl Sales Up 14.6% in 2018 Despite Streaming’s Dominance

Continuing its impressive revival, vinyl record sales have grown for the 13th straight year in the U.S., according to a report from Statista using data from Nielsen.
Robert Archer 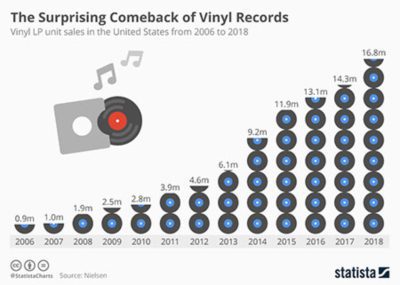 This graphic from Statista that uses Nielsen data shows the increasing popularity of vinyl with sales growing from under a million units in 2006 to nearly 17 million records sold in 2018.
Article:
Amplifiers/Receivers | News | Speakers/Subwoofers
January 17, 2019

Nielsen Data Shows Vinyl Sales Up 14.6% in 2018 Despite Streaming’s Dominance

Maybe it's time to listen to Bob Seger's advice and take those old records off the shelf.

Citing numbers from the Nielsen 2018 Music Report, Statista reports vinyl record sales have increased for the 13th year in a row, with a total of 16.8 million records sold in 2018.

Statista says records accounted for 12 percent of album sales in the U.S., which is a big number considering the niche status of vinyl playback in today's world of music consumption.

In fact, according to Statista, if streaming and single-track downloads are factored into music consumption statistics, the number of vinyl album sales drops to 2.7 percent.

All three staff members in the “challenge” admitted that for the most part, they stream music because of convenience and accessibility.

Jessie Steinberg, marketing manager for RoboBusiness, Robotics Business Review and Robotics & AI Summit, and Andrew Nichols, web editor for CE Pro.com, both stated in the listening comparison of vinyl vs CDs they do buy vinyl records and CDs in cases where digital versions of an album aren't available or as a means to help support their favorite bands.

“I mostly stream music, but I do download albums when they are not available on a streaming service. Occasionally, if the album isn’t even available through download I will purchase a CD or record,” comments Steinberg.

“I’d say that I definitely stream music a lot more than anything else, but I do still buy CDs and vinyl—when available—for the bands I want to support,” adds Nichols.

Arguably the most interesting element of vinyl's rebirth is the year-to-year growth of the format that dates back to 2006.

Back in the mid-2000s vinyl sales had dipped below a million units per year.

According to Nielsen's numbers, by 2007, vinyl sales did reach the million units sold pleateau, and since then the format has grown at a solid pace.

In a five-year span from 2006 to 2010, vinyl sales had tripled to reach the 2.8 million units sold mark, and the period from 2011 to 2015 the number did approximately triple again. In the second five-year period the total number of vinyl records sold went from 3.9 million units to 11.9 million records sold.