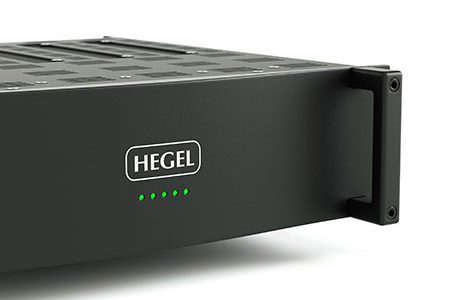 Borrowing some design elements from its other amp products, Hegel Music Systems' C5 series of multichannel amplifiers are rated to produce 150 watts per channel.

Available in a choice of three-, four- and five-channel versions, the C5 Series of amps utilize analog Class A/B designs, and they produce 150 watts of power per channel.

Hegel states the amplifiers are engineered to maintain “peak reserve capability that virtually doubles down to 2 ohms closing in at 600 watts per channel.”

“The C5 is a hybrid between our H30 monoblock and the H190 amplifiers,” notes Anders Ertzeid, vice president of sales and marketing, Hegel Musc Systems.

“The C5 is based on the latest SoundEngine2 and the sound from the H190, yet with 50 percent more output transistors and individual massive power transformers on each channel. At the same time, it uses the same concept and layout at the output stage s the H30 monoblocks, resulting in unprecedented speed and slam. Even compared to our giant H590 when people hear the C5 they go, 'wow … what was that?'”

The amps incorporate single-ended RCA and balanced XLR inputs, as well as input and output triggers, and the company says these features allow integrators to daisy chain amps for placement in various locations with remote switching capabilities.

Physically, the amps are 3U-high components and they incorporate rack-mount ears to facilitate their installation into rack environments.

“The majority of high-end speakers are 4 ohms and many will dip into 2 ohms, requiring a lot of current to keep music and action peaks fully reproduced. However, many amps simply choke at that point,” adds Brad Paulsen, national sales manager, North America, Hegel Music Systems.

“The C5s will easily deliver down to 2 ohms in a big way. These amps are flamethrowers that will seriously light up any home theater.”