It will take time to get to certified 48Gbps, especially as HDMI 2.1 testing and certification tools get developed.
Jeff Boccaccio 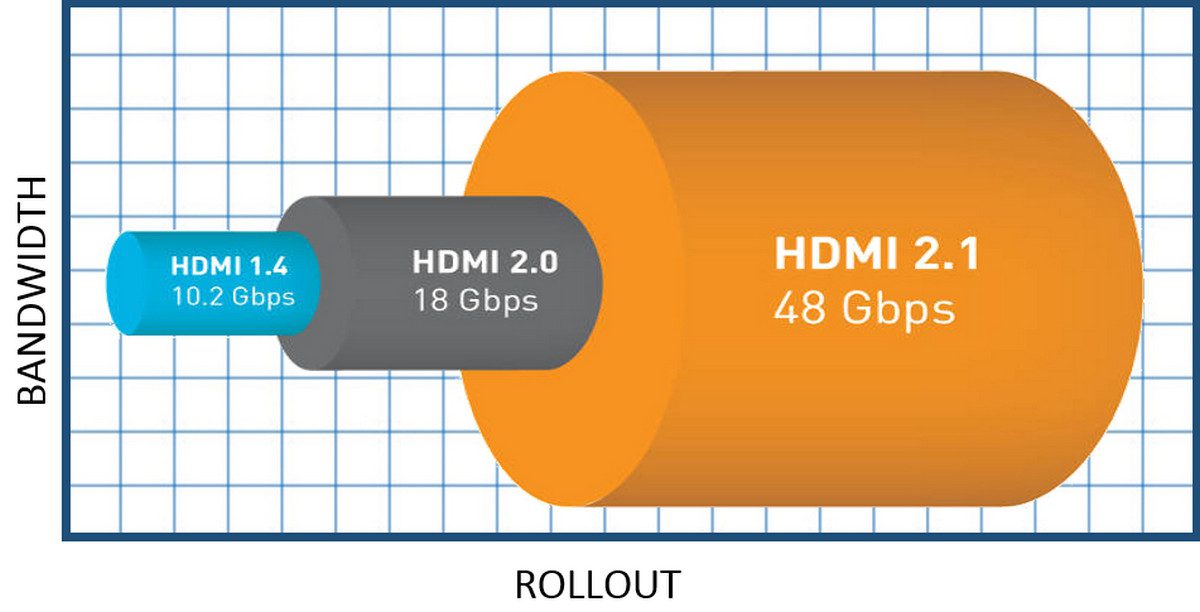 The promise of 48Gbps bandwidth over HDMI 2.1 is a "mind blower" but it will take some time to get there.

Hard to believe that almost an entire year has gone by since the unexpected HDMI announcement at CES 2017 for the release of Rev 2.1, HDMI’s new 48Gbps transmission interface. We were told the spec would be out later that year and last month it was finally officially released.

HDMI 2.1’s big attribute is no doubt its huge expansion of bandwidth to a whopping 48Gbps. Now that many of the HDMI players have had a good taste of 18Gbps from HDMI 2.0, the bandwidth improvement in 2.1 is a real mind blower.

In fact, many are still trying to get their heads around it and reporting very strange anomalies to us at DPL (some shared in this space). However, the spec will also introduce new opportunities for 4K@120Hz, 8K@60Hz, 10K, eARC and the list goes on. Already manufacturers have reported to us newer connectors — not different, just newer — with better bandwidth response.

Of course, there are transmission line limitation fears that will come with being the first companies announcing true 48Gbps cables. The bottom line is, even though the specification is released, it does not mean products can be advertised and sold. They still must pass through HDMI’s certification process and that cannot happen until the CTS (certified test specification) has been released, which at best won’t be until later this year.

Even though the specification is released, it does not mean products can be advertised and sold.

Let’s look at this from a different direction and you’ll see that although this massive bandwidth increase will be a bear, there is (at least this go around) some time to become more intimate with the interface by way of its long-term expansion. At least this seems to be how they are attempting to deploy this revision.

HDMI 2.1 Rollout will be Slow, Incremental

Think about this: Rev 2.0 was launched in September 2013, but looking back I’d say that not until the past six months has the 4K 18Gbps deployment been so aggressive.

In my opinion, this slow adoption is a result of the HDMI group not being upfront in explaining that initially Rev 2.0 was to be a lower-end 4K rather than the full 4K/60 requiring the entire 18Gbps envelope. There was never any real announcement or understanding that true 18Gbps 4K transmissions were not going to be seen until almost a year after Rev 2.0 was released, and that came via HDR’s entry into the market.

However, Rev 2.1 is coming in with key players already advocating the rollout will be incremental. One can simply look at what is presented to us and figure out that the bandwidth expansion will climb as we move years into Rev 2.1. We won’t have to worry too much on yet another revision change for maybe a decade or so.

Again, from a business side, a controlled and open expansion of 2.1 will be the best thing for everybody but the test-and-measurement crowd.

To effectively be able to test Rev 2.1 over and above HDMI standards, we have to first see how this relates to the CTS and then consider any changes in test equipment, which will no doubt be real and not something testing companies can do incrementally. The entire 48Gbps envelope would have to be taken in all at once.

There is little doubt among many industry veterans that the expansion will be slow and probably in incremental bandwidth releases. The current data rate is 5.98Gbps per channel or about 18Gbps with the aggregate of three channels. A good prediction will be expansion in stages of something like 8, 10, 12Gbps per channel using four instead of three channels by eliminating the clock channel and converting that to an additional high-speed video lane.

The slides show how just a 1-meter cable is affected by increasing its signal from 6Gbps to 12Gbps. We did not introduce any new form of internal sink equalization, but even with Rev 2.0 equalization you can see the huge amount of insertion loss. It’ll be interesting to see how the HDMI entrepreneurs develop new and exciting products to help control a 48Gbps beast.