Hiring a COO, tricks to get architects and designers to attend lunch-and-learns, grading your independent reps, and putting pricing at the end of the proposal are among the business advice shared at Azione Unlimited conference.
Jason Knott 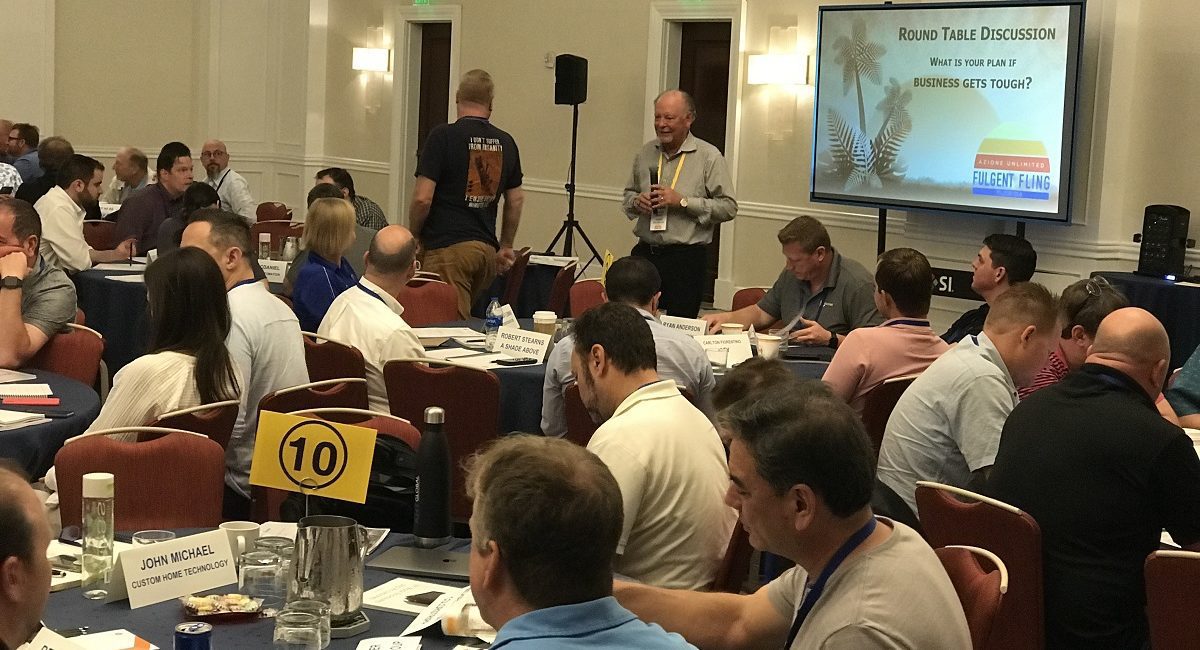 Why should you think about excluding TV displays from the original proposal? Azione Unlimited members shared their thoughts on the matter during the roundtable discussions at the buying group's recent spring conference.

At many industry events, integrators often learn more from impromptu conversations with their fellow CE pros than during any formal educational session. The recent Azione Unlimited “Fulgent Fling” spring conference in Bonita Springs, Fla., was no different.

Dealers gathered during information sharing sessions to address particular challenges and ballyhoo any successful business practices, know that the chances are good that many integrators face the same issues all across the nation.

Here are seven tips gleaned from the event that might be useful for your operation. Are you doing any of these yet?

Most custom integration companies have project managers after the company has attained a certain size, but does an integration company need a direct role to whom the PMs report? Probably, according to many Azione members, who have found value in the chief operating officer (COO)/ field supervisor role.

So where do you find such a person to fill that role? According to Kim Michels of Electronic Environments in New York City, the best person to fill that role is a project manager who has worked his or her way up the ranks. Michels actually has a role of Field Supervisor in his company large company, which has more than 80 employees.

Todd DeAngelis of Signals Audio Video in El Segundo, Calif., notes that all his project managers come from within the organization. Signals AV also has a COO, but he still does double duty as a project manager.

Other integrators advised advertising for a “process engineer” to run their operations.

Architects and interior designers need to attend educational events to earn CEUs to maintain their professional accreditation. But how does an integrator actually get those trade partners to show up for a lunch-and-learn event? It’s not easy.

He routinely invites about 40 architects or designers and will get 20 or so to attend on average. He sweetens the deal by giving the attendees full Lutron shade sample books to take with them. He pays for those books by using his co-op money with Lutron.

Ron Lennox of Definitive Electronics in Jupiter, Fla., has another solid, yet simple, tactic to get architects and designers to attend. His invitations say, “Seating is limited: We will only accept the first 12 attendees who respond.”

“That statement spurs them to act. If we end up with more than 12 attendees, then we figure out a way to accommodate the additional people,” he notes.

For many integrators their point of contact with a manufacturer is the independent sales rep who covers their territory. Some reps are more diligent than others. At the Azione meeting, members were commiserating about the “worst rep” in their particular area.

At Definitive Electronics, Lennox grades his reps every year with a report card-style A-through-F grade.

“I take into consideration response times and other factors. Most of them are surprised by their grade,” he admits, but says most of the reps vow to improve based on the grade.

“I present to every customer two options for control and make it clear that I don’t care which option they select.”
— Luke Germain, Tune Street

Several integrators, including Luke Germain at Tune Street and Travis Leo at Residential Systems in Littleton, Colo., say they are now “de-emphasizing” control systems in their conversations with clients.

That trend is being driven by the proliferation of single-purpose apps for particular devices that many customers don’t seem to mind using. Also, integrators can earn greater profit margin on other pieces of equipment.

“I present to every customer two options for control and make it clear that I don’t care which option they select,” says Germain.

“I let them know they can select a centralized control interface option or they can choose a solution that has an individual app for each device… one for their shades, one for their audio, one for their lighting, etc. I am OK if they choose the multi-app option because I would rather sell them two more motorized shades or another device that I make more money on.”

Of all the components integrators install, TV displays are the most price-sensitive in that most consumers are aware of how much a TV costs. Unfortunately, they are often using displays sold at Costco as their comparative.

At ABE Networks in Rockville, Md., Avi Benaim says the company no longer includes TVs in it proposals. Instead, his proposals will have a list of recommended units and sizes that can either be purchased by the client or by ABE.

This tactic serves two purposes: First, it allows the client to always have the latest-and-greatest TV technology. That is especially important in large projects that might have an 18-month timeline from proposal to final installation. If the TVs are spec’ed in the original proposal, that means those TVs have year-and-a-half-old technology.

“We usually don’t buy the TVs and install them until the last month of a big project,” says Benaim.

The second reason ABE does not include the TVs in the original proposal is that it reduces the total cost of the proposal and makes it more attractive to price-sensitive clients.

Put Your 'Sticker Shock' Price at Beginning of Proposal

During the proposal presentation process, most clients are anxious to see the final price, especially on a large, detail project.

Typically, an integrator runs through a proposal page by page with a client and then the final price is the last page. Often, that “sticker shock” leaves the client dazed and confused.

Robert Stearns of A Shade Above in San Jose, Calif., flips the entire conversation.

“The first thing on all our proposals is the final cost,” he says. “That puts the ‘sticker shock’ upfront. Now, I launch into the proposal and explain how I came to that final figure. It gives me a chance to engage them in discussion about the pricing.”

The verdict is still out on whether it is most prudent to buy new or used fleet vehicles. DeAngelis at Signals AV only buys used cars. Given the state of traffic in L.A., it means his vehicles are taking a pounding, so that sounds like a wise decision.

However, other Azione members say the new Section 179 tax law provisions that allow for increased deductions make it more beneficial to purchase vans and trucks.

The group praised Azione’s vehicle buying program which enables them in some cases to save as much as $10,000 on Ford, Nissan and Mercedes vehicles (in combination with the tax incentives).