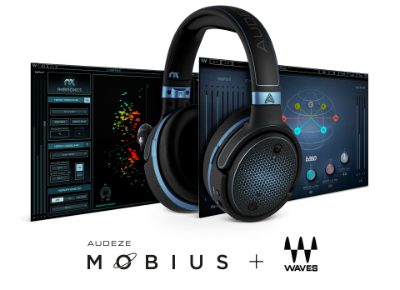 Audeze has partnered with Waves, using its Nx technology to power the new Mobius headphones, providing professional users and enthusiasts with a 3D listening experience.

A new Audeze and Waves partnership has been formed to provide audio professionals and consumer enthusiasts with a high-performance 3D headphone listening experience.

With a partnership between Audeze, a manufacturer of headphones for professional and audiophile applications, and Waves, a DSP solutions company for various audio markets', the two companies set out to create a “true, real-world” listening experience via the Audeze Mobius headphones.

“Audeze is delighted to be joining forces with Waves,” states Sankar Thiagasamudram, CEO and co-founder, Audeze.

“Waves' 360 Ambisonics Tools, which include the B360 Ambisonics Encoder and the Nx Virtual Mix Room plugins, all seamlessly interact with the Audeze's planar headphone for diverse uses, be they in gaming, 360/VR mixing or mixing in non-acoustic environments, and from surround monitoring to consumer listening experience.”

Waves says the Nx technology also allows the Mobius headphones to communicate with its Nx Virtual Mix Room and Waves B360 Ambisonics Encoder plugin that are specifically designed for VR/360/3D mixing and monitoring in Ambisonics formats.

“Audeze headphones have achieved worldwide acclaim among music industry professionals and audiophiles alike for their amazing sound and for innovation that has kept them on the cutting edge of technology,” adds Gilad Keren, CEO and co-founder, Waves.

Some of the Audeze Mobius' other features include: