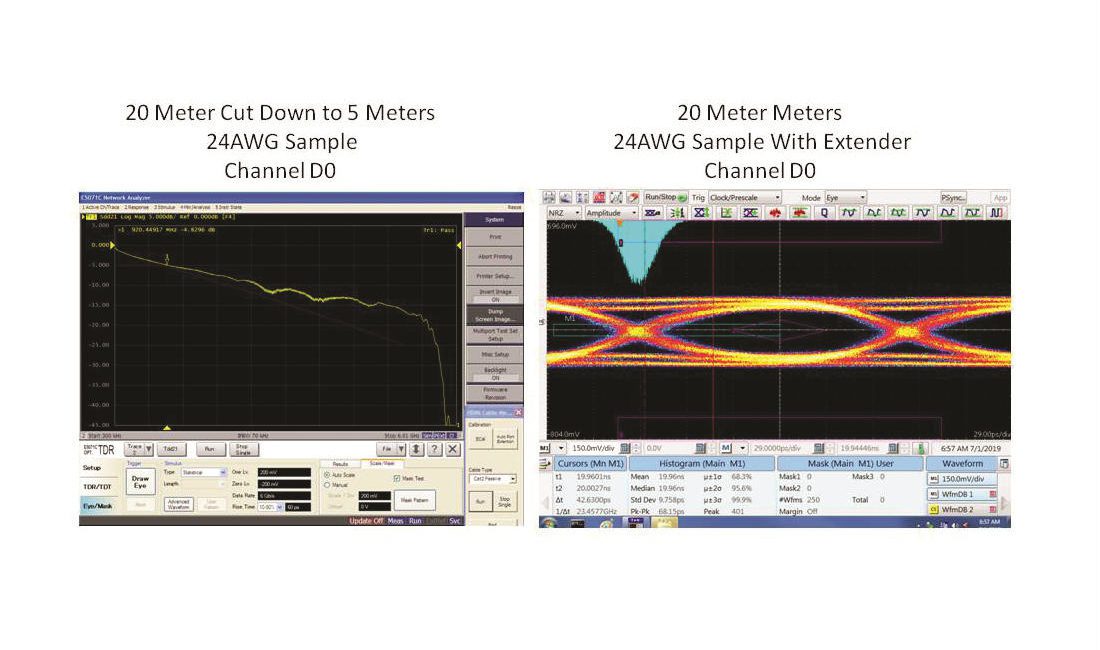 Now, almost five years after HDMI’s Revision 2.0 with 4K@60Hz was released, it seems we can safely say that content is there and demand is high. There are still thousands of users limited to 1080 Deep Color/4K@30Hz due to the transmission line used in their system. Remember that when Rev 2.0 was announced it was also announced that there would be no cable change and that any Rev 1.4 cable would suffice.

Well, that is not totally true because Rev 1.4’s data rate is exactly the same as Rev 1.3. So basically as long as you have a Rev 1.3 “High Speed” cable you should be safe for the video, but many Rev 1.3 cables may not support HEAC and ARC.

Then we have the distance issue. There are tons of systems out there that are using 1.3 and 1.4 cable in their walls and ceilings. So they may be capable of viewing 1080P Deep Color/ 4K@30Hz with a 10.2Gbps data rate, but when it comes to moving up from 10.2Gbps to 18Gbps and 4K/60 UHD things can get a bit sticky.

The only way to rectify this is to pull the cable out and replace it with some form of medium that can handle 18Gbps.

The solution to this problem is extenders, which are said to be designed for 18Gbps in place of the older 10.2Gbps. Th at means, from a test and measurement perspective, new testing processes must be customized and built. This was done at DPL Labs and the byproduct of this exercise was quite interesting.

Read Next: What’s the Deal with AOC Failures?

A sampling of 30 different Rev 1.3 and 1.4 extender cable products with different gauges and lengths was brought in to DPL Labs for testing.

The specifications on these extenders called for, at minimum, a cable that was able to pass 1080p Deep Color/4K@30. Cool, that means 9Gpbs, or 3G per channel. Got it. And during testing, many of these extenders really worked! Some even responded well with 20-meter-long cables while reproducing perfect Eye Patterns along with functioning with displays with Apple TV, generators, and Blu-rays.

Everything was good until one cable had a relatively small amount of insertion loss on just one channel and would not produce a picture. The results from the active HDMI troubleshooting tests were pretty straight forward and scary at the same time.

It turned out that one of the three channels in the cable took a nosedive. Fig. 1 (above) shows Channel D0 with a good response curve and perfect Eye Pattern using one of the 4K/60 extenders.

Notice in Fig. 2 (below) the story changes with D2’s response curve a bit dodgy and its resulting Eye Pattern after using the extender is in the dirt. Using several of the same cable models produced the same results channel for channel.

Then, out of the blue came the last sample of the same model that worked! It had to be from a different dye lot. Was the cable defective? Not really, it was close to making it to its 9Gbps spec but nowhere near the other channels.

That is where it comes down to the quality and the consistency of manufactured products. Why were D0 and D1 so good and yet D2 went in the toilet? Oh, and by the way, fiber is no different. We see the same thing; however, it is PCB issues that cause these inconsistencies.

The moral of the story is this: If you have a system that uses old 1.3 or 1.4 cabling and want to upgrade it to 4K/60, and I mean REAL 4K/60 like UHD, using these types of extender products can be an easy way out but always keep in mind that any cable deficiencies can limit your expectations.