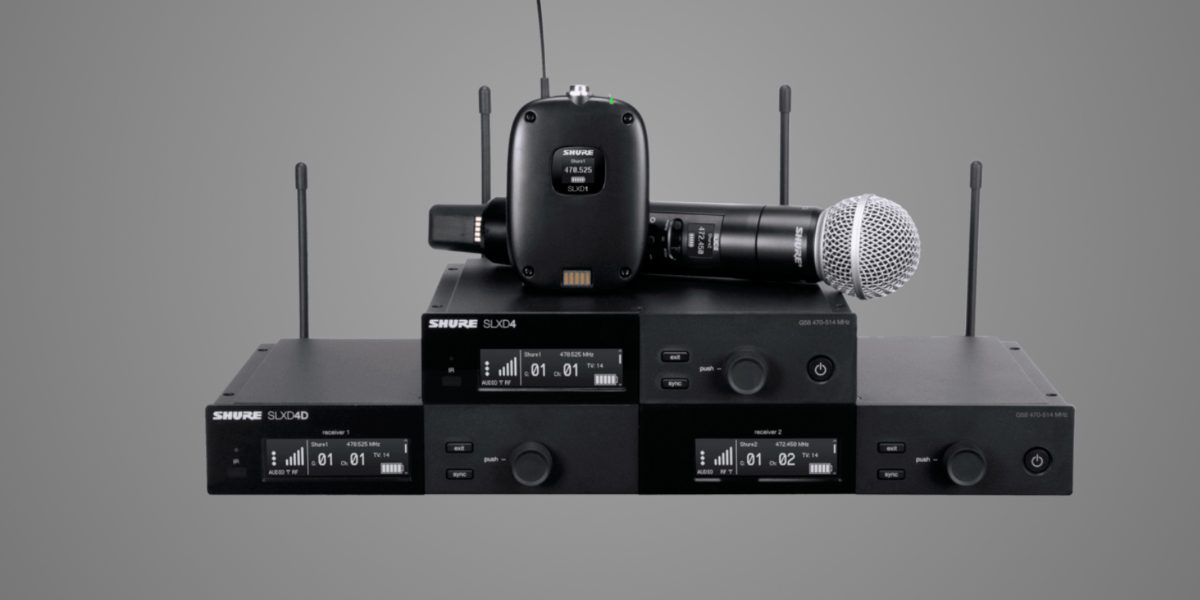 Shure is one of the venerable names in the microphone business, offering a wide range of wired and wireless microphone options for a wide range of applications. They recently discontinued the SLX series of wireless products and replaced them with the SLXD lineup.

SLX had been in production for many years. It was a frequency agile, diversity antenna system that offered handheld, lavalier, headset and instrument options. The diversity system had two antennas per channel and constantly checked which of the two was delivering the better signal.

The new SLXD series has taken that series and enhanced it with upgrades that allow a greater number of wireless channels, increased battery life, channel identification, and more by using digital technology.

Wireless microphone systems all will have a receiving base, which plugs into the mixer, and a transmitter that the performer will take with them. The transmitter can be built into a handheld configuration, often called a stick, or a small bodypack, similar in size to an old school pager, that a headset or a clip-on lavalier microphone would plug into.

Readers may recall that the FCC regulates what devices can be used in the range of radio frequencies that are available. In recent years, there’s been an explosion of devices operating in the wireless spectrum, and the range of frequencies available for microphones has shrunk, at least in the UHF band.

Your mileage will vary, depending on where you are operating the system, and savvy installers will use the online frequency finder tool that Shure offers to make sure you don’t get into a conflict situation.

Range on the SLXD can be up to 300 feet or more, again depending on the surroundings where the microphone is deployed. Remember that things like metal from old plaster lath, steel studs, heating and air conditioning vents, insulated glass windows and more can all impact the range of a wireless system.

There are ways around those issues, including moving the receiving base closer to the transmitter and deploying a long balance audio cable back to the mixer, or by using an external antenna system. The external antenna systems are typically used in applications where there might be multiple channels of microphones in use and having multiple antennas is simply not practical. Check with your supplier if you need assistance specifying that type of antenna system, as the right parts list is essential for successful operation.

The sample I tested at home allowed me to walk outside the house, down a flight of steps to the sidewalk and travel about 100 feet away. Essentially, I used it through insulated glass and a retaining wall before I got down to two bars of signal strength.

Setting up the SLXD System

The new SLXD system is remarkably easy to set up. First, plug in the receiving base and scan for the first available frequency. When that’s done, you pair the transmitter to the receiver and move on to the next set, always leaving paired channels on to ensure performance on the new set. 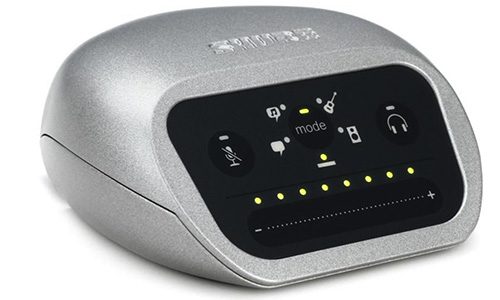 After you’ve done that, you can go in and label each of the receiving bases with what that microphone is being used for; I might set microphone one up for Faith, and microphone two up for Tim, and microphone three up for Jacob, and four up for a wireless pack for the guitar player. Having them labeled means it’s easier for the sound tech to do his job; no more white tape with sharpies required.

The SLXD base will also show battery life on the receiving base, which is really useful in preventing bad things from happening. The receiving base also has a signal strength meter on it, allowing the sound engineer to see if the performer is getting into the danger zone of low signal levels. Each channel also allows the engineer to adjust output gain, which can be handy when singer one is softer than singer two.

The transmitters for the hand held microphones can be purchased with the user’s choice of microphone cartridges. Those cartridges can also be switched out, simply by purchasing a different cartridge and installing the new one. The stick itself is metal, and has a solid feel to it. It requires two AA batteries to operate, which should provide up to 8 hours of life.

The body pack transmitter is also metal, and features a threaded insert point for the microphone chosen, which helps prevent awkward disconnections in use.

Both the handheld and the body pack give you the option of using Shure SB903 Lithium Ion rechargeable batteries. You can get a single slot recharging station, model SBC10-903; the dual, model SBC203, allows you to drop either the stick or the body pack into the charger directly for quick and easy charging. Folks running a long event like the idea of having a spare set of Shure batteries in the charger so a swap can be done on the fly.

Shure offers the receiving bases in either single or dual-channel options. Both are one rack unit high; the single is half width, the dual is full width. The dual has two antennas on it, essentially providing antenna combining onboard. It’s a clever solution that can save some money over a larger antenna distribution system.

Sound quality on the system I tested was superb. The sample I worked with came with both an SM58 microphone in a handheld transmitter and a model MX153 headset microphone paired with a bodypack transmitter. The MX153 is a lightweight headset style of microphone, and would be appropriate for classroom and religious institution applications. I like headsets for this type of application because they’re discreet, and the distance between the microphone element and the mouth is the same no matter which way the user looks.

Shure offers a less expensive series of wireless products called the BLX series. BLX is a fine alternative for folks who don’t need the channel count affords, or needs the robust handheld mic, or wants the sound engineer convenience features, or rechargeable battery option. But for large churches, schools with large theater programs, community theaters, or facilities that might not need high channel count per room but have multiple rooms, SLXD is a winner.