If HDMI problems put you in a tizzy, Metra Home Theater Group had you and every other installer in mind with its tiny problem solver, the HDMI All-in-One Correction Tool (AIO2).

The company highlighted the versatile applications for the product, which won a CE Pro BEST Award, at its CEDIA Expo 2019 booth in Denver.

“It fixes a vast majority of problems that an HDMI integrator/installer has out in the field,” says Brent McCall, technical support and product development, Metra Home Theater Group. “It allows you to force a hot plug reset, which allows you to restart the entire HDMI system. It fixes resolution issues, HDR issues, and audio [dropouts].”

The device also has a capacitive stripper built into it to make sure the rise time is correct on all the DDC EDID bus information. Additionally, it provides supplemental voltage to 5-volt, hot plug and the TMDS (transition minimized differential signaling) issues.

“For those of you with satellite receivers and cable boxes, you’ll know that TMDS problem because jobs that worked perfectly for years are suddenly showing HDCP failures – and it’s not; it’s a voltage and current supply issue,” McCall explains. “So this will take care of that problem.”

In addition to being an all-in-one troubleshooter, Metra’s AIO2 has a redesigned circuit board for better efficiency and faster input switching, a smaller footprint and a lower retail price than its first-generation predecessor, according to the company.

‘99% of the Problems’ in Field Addressed

The most common, explains McCall, is capacitive loading of the data bus, or rise time. For lighting automation installers, it represents how long from all off to all on, he says as an analogy.

Typically the HDMI-AIO2 will be installed into a system at the offending source, McCall says. For instance, take a system that has a 1080p/4K streaming device going into an AV receiver, and the AVR going out to the display.

“You’re watching and you go from 1080p to 4K and it looks pretty good but eventually you want to go back to 1080p to a menu or standard Netflix or Amazon Prime show and it might not do it,” he says. “You may get no picture, failure to sync, weird color shifts.” 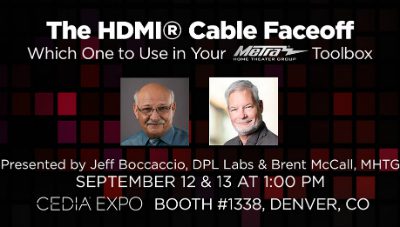 Ordinarily, McCall says, there are two HDMI processors in every device, an older HDMI 1.4 chip and a 2.0 chip, and they have to determine which chip to use for which show.

“If that fails – and it’s handled by effectively a traffic cop – then the system just doesn’t work, because it doesn’t know to step back down and use the older chipset for the older resolutions,” McCall says.

There’s a phoenix connector on the side of the device ties to any relay on a control system or an outboard processor and acts as an HDMI reset, so that “negotiation” process can start over and resolve the problem.

“It interrupts the hot plug, it restarts and asks, ‘Who are you, what are you, what resolution, bit rate, all the steps that have to happen to get picture and sound,” McCall says.

That’s in addition to what he describes as “all of my previous repair tools in one chassis. … It fixes issues within the EDID DDC bus, and that is 99% of the problems that these guys experience in the field,” he says. “It should be in everybody’s tool box.”