Integrators can address a variety of issues with connected equipment via control and data analysis, as SurgeX showed at ISE 2020.
Arlen Schweiger

Lauren Simmen says SurgeX's Squid wasn't originally intended for the residential market, but the compact form factor is installation friendly for both commercial and resi use.

Forgive SurgeX for misleading a bit with its latest multipurpose Squid power device.

As often happens, from concept to reality the form factor changed – it was originally imagined with eight electrical pigtail connections coming out of the box, conjuring visions of the sea creature. Shown at the recent Integrated Systems Europe tradeshow in Amsterdam, the pigtails are no longer part of the configuration, but the catchy name stuck, says SurgeX director, marketing Lauren Simmen.

While its theoretical tentacles were lopped off, Squid’s actual reach has extended in the meantime, however. Previewed at tradeshows last year before showing a polished version at ISE 2020, the device has gained integrator appeal on both the commercial and residential market fronts, Simmen notes.

“We soft-launched at InfoComm last year and had it at CEDIA [Expo]. We had no intentions of putting this to the resi market, it was going to be commercial only, and then at InfoComm because it was in Florida we have a ton of dealers who go there and they are all going gaga over it,” she says of the commercial tradeshow locale, known to be the most lightning-struck state in the country and naturally large market for power protection.

Simmen says Squid is going to be SurgeX’s big platform moving forward. Any why not? It combines the company’s Axess ELITE IP-enabled rack-mount products capabilities with its enVision diagnostics in one chassis.

“We’re able to monitor your incoming voltage, your current, your current per outlets, logging all of your power anomalies … basically anything that happens within this box we’re taking that data and we’re analyzing it,” Simmen explains.

“And the same way with our traditional enVision it will give you all the reporting now, it will give you the history analysis, which is where we have algorithms built into the back end – where it takes all that data and based on the analysis says, ‘Hey, look at this’ or ‘look at that,’” she says.

The chassis itself covers a ton of ground. Squid includes two 5V USB ports inputs for charging (more for the huddle space applications on the commercial side) and network troubleshooting; and eight outputs, four being traditional controlled and monitored IEC receptacles and four DC, so integrators can eliminate wall warts or a two-box solution, Simmen notes.

SurgeX offers Squid in three models that on the DC side incorporate two banks of 12V, two of 24V, or a combination of one of each supply.

By using a relay-based system, the AC and DC ports can be controlled, the device can be monitored. Squid will also contain the drivers ready for popular third-party control systems so integration can be plug-and-play when it starts shipping in early April, Simmen says.

Integrators can use Squid to power small spaces and keep them running smoothly with preventative maintenance, mounting the small device in the rack, behind a flat panel, mounted under a table, or integrated into a table hatch.

With built-in autosensing, Squid is also the first SurgeX product with universal compatibility for 120V to 240V, allowing companies to simplify installations and spec the same product into its offices or homes worldwide.

Integrators Can Be Proactive with Power

Squid features built-in diagnostic monitoring made popular in SurgeX enVision, providing a single solution for management, mitigation and control of the system’s power.

“Things like a branch circuit being overloaded, or you make too much draw … things that unless you’re a licensed electrician and really looking for a problem you’re not going to see,” Simmen says.

She says one problem the company sees, particularly on the residential side, is that when power problems do arise it turns into a game of ping-pong between the integrator and electrician over whose domain it was.

“The gear isn’t working but it was working before, so they assume it’s with the power,” she says. Now, because of its compact form factor, Squid can stay in a rack permanently for monitoring and control, whereas previously enVision might be used onsite temporarily for site surveys before equipment was installed.

“Now we’ve built a form factor specifically for the AV space,” Simmen says. “Now [integrators] can go in and see what’s going on, if they have certain issues is it something on the electrical side, and they can go back to the homeowner and say, ‘Our gear isn’t working, we need to treat this because …”

And if they can’t figure out what’s causing equipment problems (or it doesn’t appear to be a power issue), SurgeX welcomes integrators to send over the reports and analytics.

“We have our engineering team dissect it and say, ‘All right, based on this here’s what we recommend.’ That’s just our standard what we do for our customers,” Simmen says.

SurgeX Can Assist with Analysis

It could be that more investigation work is necessary, so with Squid the integrator can take the box and let it sit for a week running diagnostics, for instance.

“Instead of throwing more boxes and money at the problem, let’s figure out the root cause,” she says. “We’re going to log all of our events, so any power anomalies, any of the triggers that happen on the control side … now they can go back in and say, ‘I’m having a reboot issue on this product and it’s happening a lot. What’s going on here? Is it connected equipment problems?’” 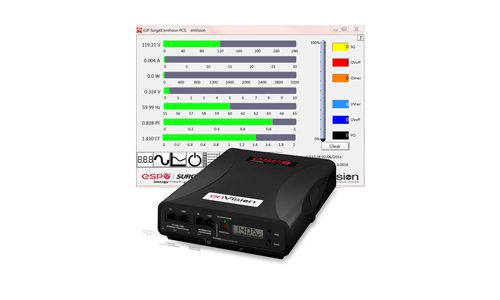 “The whole box itself will hang on the network, so you can remotely go in and manage it,” she says, adding that the secondary USB outlets also act as a method for integrators to access things if the network goes down. “If you need to get into the device you can control it and program it through the USB.”

Speaking of the network, SurgeX also addressed fears of hacking into a system through the power device by using 802.1x protocol for extra security, Simmen says. Plus it’s enabled for single sign-on or active directory, particularly handy for commercial installation in applications sensitive to data such as financial and healthcare customers.