Is It Time To Reassess the WFH and Hybrid Work Movement?

A portion of the workforce has unreservedly embraced the WFH movement, while others are looking for office environments to be more functional and enticing.
Dan Ferrisi 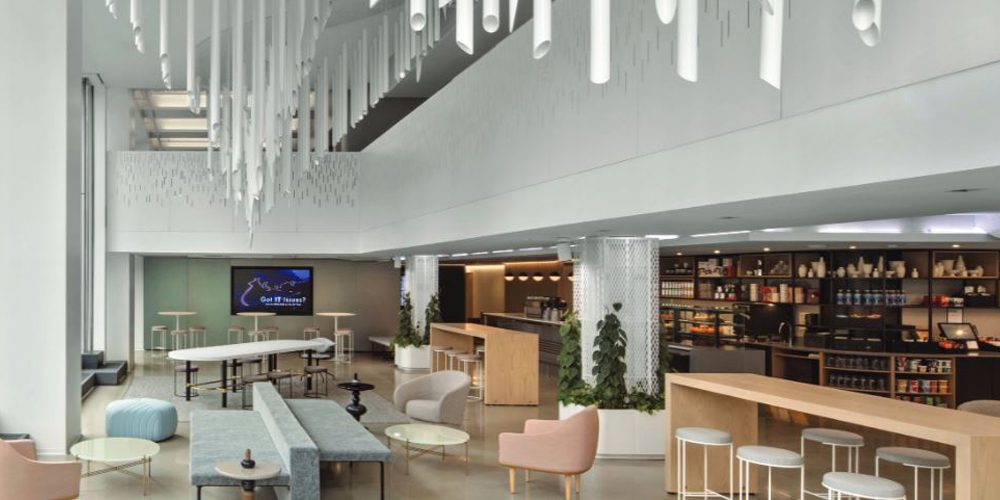 Is It Time To Reassess the WFH and Hybrid Work Movement?

Amid the ongoing COVID-19 crisis, some industry observers have forecast “the death of the office.” Massive companies like Twitter have instituted a permanent work-from-home policy or flexible hybrid work policies for all who want to. Even in CE Pro and Commercial Integrator’s own pages, we frequently publish the views of articulate remote-work exponents who argue that the old days are never coming back.

This month, we ask a provocative question: Are reports of the death of the office greatly exaggerated? If so, what kind of office is viable in 2022 and beyond? CE Pro’s sister publication Commercial Integrator recently approached St. Louis, Mo.-based HOK, a design, architecture, engineering and planning firm, to get some answers.

We speak to Kay Sargent, director of workplace and senior principal, and Rachel Rouse, director of interiors for the Dallas office and principal, both of whom explored this topic during the Almo E4 Experience this past November.

Here, they help us analyze the contemporary enterprise market and its return-to-office efforts. All told, Sargent and Rouse weave a much more equivocal narrative than work-from-home (WFH) advocates typically propound.

There’s no doubt that a portion of the workforce—knowledge workers, mostly—can do most of their job duties from home. And when the nation shut down in early 2020 and workers were sent home, many employees were eager to show that a non-office-based model could work.

Those with long commutes, for example, saw a way to avoid hours on the road and vehicle wear and tear. Unsurprisingly, then, early data analyzing remote-worker productivity buttressed the WFH-is-viable theory. But, addressing productivity, Sargent notes, “We saw a drop [that started] in August of 2020.”

For Sargent, any number of factors could be to blame. She highlights that, for many WFH employees, commuting hours have now been rolled into working hours; that means many WFH employees are putting in another 10 hours a week. The mental and physical exertion—combined with the relative isolation of home offices—is “taking a toll on people,” she says.

“We’re starting to see that.” Sargent also highlights that productivity is just one metric of employee output, and it’s unwise to measure an associate’s contributions to the company simply by gauging their industriousness. Arguably more important metrics, she says, include work quality, innovation and intraorganizational transfer of knowledge.

Rouse cites mentorship programs as suffering during the WFH era. “It’s so much more difficult to create a real human connection with someone you’ve never met before—when they’re [just] over a screen,” she says with regret. There’s also arguably a diminution of interpersonal team cohesion because, when people spend less time together, they never develop a tight bond.

“When you travel with somebody, for example,” Sargent says, “you just connect in a different way.” And with studies indicating that, since the pandemic, depression rates in the U.S. have more than tripled, it could be that people are simply missing that sense of human connection that most of us crave.

Why, then, do so many workers seem reluctant to return to the office? Part of it might be that we’ve already had our routine broken once, and we’re reluctant to experience yet more change.

“People don’t want to deal with changing yet again,” Rouse concurs. Sargent analogizes it to being told you’re moving into a beautiful house, but you have no idea where it is, and the move might take months and months.

“We are now in an extruded transition, with no clear end in sight and no clear state of what that will be,” she says. For many people, that is discomfiting.

We understand that offices can be, at least theoretically, hubs of company culture and interpersonal engagement. And that kind of environment could well entice people out of their houses. However, many workplaces, pre-pandemic, were just as solitary as home offices are. Sargent analogizes bedrooms to cubicles, saying that we all wake up in an enclosed space every morning. “I could just stay home if that’s all I’m going to have at the office,” she states. “The question now is, ‘What are you offering me at the office?’” she says. “What is there that I can’t get at home?”

One answer, Rouse suggests, is an activity-based working (ABW) approach. This means employees having access to a range of technology-enabled work environments to suit the particular activities in which they engage individually and as a team. Rouse says HOK clients that had already begun to implement an ABW approach not only returned to the office the fastest but also have been the most successful.

“If your people are flexible and your space is flexible, you’re going to much more easily be able to meet what comes at you from the outside world,” she observes. Sargent amplifies the point, emphasizing the shift away from dedicated individual spaces. The future, she predicts, lies in “shared, collective areas for people to engage—and for you to engage with [your brand].”

Reimagining the office isn’t merely about architecture and design; there are also technological dimensions for AV integrators to perfect. According to Sargent, “We need to reconsider the meeting experience altogether.” Out, she says, are long tables in rectangular meeting rooms, packed with as many chairs as possible and with a video monitor way down on the far-end wall. With more people recognizing the importance of meeting equity, Sargent recommends a semi-circular or U-shaped table, with cameras and screens positioned on the longest wall to give all participants an equal view.

Given that a portion of knowledge workers will stay remote, meeting equity must extend to those employees, as well. “We’re going to need more microphones in meeting rooms,” Sargent argues. “[Otherwise,] people are going to have a hard time hearing when they call in, if you’ve got multiple people in the room.” Equality of the visual experience is also important. “We want cameras that will follow whoever is speaking and [that] will zoom in on that individual,” she continues. “But you also have to be able to see the rest of the room.”

Rouse echoes Sargent’s call for robust technology integration—everything from room-booking systems to voice- and facial-recognition for low-touch to no-touch interaction—but stresses that these systems mustn’t intimidate the associates they’re meant to help.

“We still haven’t made a lot of our internal conferencing technology ‘dummy-proof,’” Rouse laments. Discussing the notion of digital fitness—an assessment of the client’s technological aptitude and ability—Sargent says that we must get away from doing the equivalent of giving a 16-year-old child a Porsche. When we do that, she sighs, the client ends up with “a $50,000 piece of technology on the wall that’s basically a $50,000 piece of art.”

In short, if technology is part of the recipe to lure associates back into the office, it must actually be usable—that means one or two touches, and that’s it.

How Integrators Can Adapt to the Hybrid Future

The long-term trajectory is clear: for virtually all employers to cultivate a hybrid workforce. One difficulty is that, at this point, there is virtually no uniformity of execution. “We are in the Wild West of hybrid officing,” Sargent quips, bringing up that some employees have decided they’ll just take the afternoon off anytime they feel like it and catch up by working late at night.

Sargent makes the obvious point that that complicates things for clients who need immediate answers and team members looking to collaborate. “There are not a lot of rules [right now], but they’re coming,” Sargent adds.

When hybrid workforces are more organized, companies can make more informed decisions about what kinds of office square footage (and integrated technology) will suit their needs. Rouse shared an anecdote about a company whose lease recently expired and that, for now, has shifted its 40-something-person workforce to a coworking space as a temporary waystation. When the future becomes clearer, that company will decide what kind of square footage to lease and what technology to utilize.

“There’s a fear of, ‘I’m going to spend all this money, and you’re just going to come out with something [new] next year,’” Sargent elaborates. It’s an argument for integrators to embrace what Sargent calls a membership model, or a leasing-based approach.

For a monthly, quarterly or annual fee, the integrator partner leases the technology to the client, and the integrator regularly comes in to manage, update and refresh the systems to ensure they’re up to date. It’s a wait-and-see approach not entirely dissimilar to the company whose team is parked at a coworking space. But, importantly, it doesn’t require the client ever to go without. “If I can lease a new printer and have that replaced every couple of years,” Rouse reasons, “then it would be lovely if I could do that with my other information technology equipment [and] with the AV system.”

Sargent takes it a step further and asks whether individual companies necessarily need their own Cadillac-class integrated systems. “We’re moving into the sharing economy, where access is the new ownership,” she opines.

“Not every company needs a fully tricked-out conference room that gets used once a month, once a week or even once a day. What’s important is having access to it.” Sargent floats the idea of shared spaces in commercial environments, where multiple tenants have access to a collaboration space rich with integrated communication systems. “I just use it when I need it,” she says, putting herself in the client’s shoes, “It’s an amazing experience, and I just have to show up.”

We find ourselves looking ahead to an uncertain, but exciting, future. Integrators should consider the viability of shifting at least some clients to a membership or leasing-based model to give them peace of mind that they’ll never make a huge capital expenditure only for the system to be obsolete a year later.

Building owners and end users should ponder the wisdom of shared technology spaces to reflect the fact that partially depopulated offices—not to mention the ubiquity of collaboration platforms like Microsoft Teams—might mean not every company needs its own million-dollar systems.

And even if a client does need its own integrated AV—and even if leasing isn’t the right model for that particular customer—integrators must nevertheless not only make the technology user-friendly but also speak in a language that’s comprehensible to the decision-maker. “Think about how you speak to the CEO, not how you speak to information technology,” Rouse summarizes.

Lamenting that inaction is currently prevailing, Sargent issues a call to arms for leaders to show the way forward and break the inaction paralyzing some organizations. “What we need right now are courage and leadership,” she declares. In the meantime, as many remote employees struggle with loneliness, isolation and burnout, they remain stuck in neutral, waiting for a better option to arrive.

Dan Ferrisi has been covering the commercial AV industry as an editor, reporter and writer since 2004. He is the former editor of Sound & Communications, and he joined Commercial Integrator as editor-in-chief in November 2021.