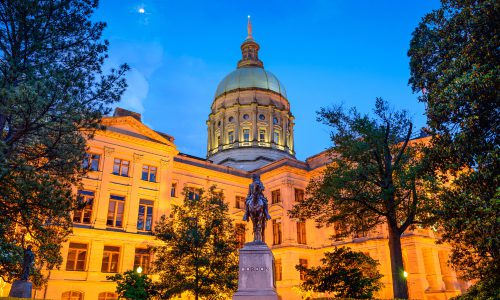 Low-voltage smart home integrators who install alarm systems in the state of Georgia just got some good news, as the Georgia General Assembly has recently approved legislation that bans counties and municipalities from fining alarm companies for false alarms that are generated through no fault of their own.

Enacting the law will end a years-long legal morass that transpired after the City of Sandy Springs passed an ordinance that fined alarm companies instead of residents and businesses for repeated false alarms.

Also located in the metro Atlanta area, the City of Brookhaven adopted a similar ordinance in 2018 modelled after Sandy Springs’ law that shifted the responsibility for false alarms to installing security contractors instead of end users.

Loud, who has fostered deep connections in Georgia’s political and business landscapes, and Holly Borgmann, vice president, government affairs at ADT, are principally responsible for efforts in crafting HB 465 and seeking sponsorship for it in the legislature. Loud also credits the Security Industry Alarm Coalition (SIAC) and various manufacturers for their continued financial support and advocacy throughout the legal wrangling.

While alarm companies in Georgia can celebrate HB 465 becoming law, Loud says the real victory for the alarm industry ultimately lies in stemming punitive ordinances from becoming law throughout the nation. It is a “call to action” that all alarm industry professionals need to champion, says Loud, who also serves as a vice president of the Electronic Security Association (ESA).

“The big celebration for us is not only did we prevent the spread of [Sandy Springs’ ordinance] throughout Georgia, but for all of us across the nation to realize the example of what Sandy Springs was trying to do,” Loud says. “We all united working so closely with Stan Martin and the amazing SIAC team, with the dollars we all contributed to deal with this from a legality standpoint. We have a law passed that is for all jurisdictions.”

In a statement on Thursday, SIAC Executive Director Stan Martin says ordinances similar those adopted by Sandy Springs “do little to change user behavior, deny the user the right to confront their accuser and access to due process, and fines an innocent party for the actions of another.”

He continues, “There has never been any evidence that fining alarm companies was any more effective than the model alarm ordinance that is widely utilized nationally and endorsed by the Georgia Association of Chiefs of Police.”

For the past two decades, SIAC has collaborated with agencies such as the International Association of Chiefs of Police (IACP) and National Sheriffs Association (NSA) to develop and refine a model alarm ordinance that is said to reduce alarm dispatches.

“The model ordinance, which fines alarm users, obtains an average 60% reduction in false dispatches and impacts those causing most of the problems,” Martin says. ” In fact, 85% of alarm systems generate no calls to the police in any given year.”

SnapAV Elevates Its Service Game in 2020

See All Quest for Quality