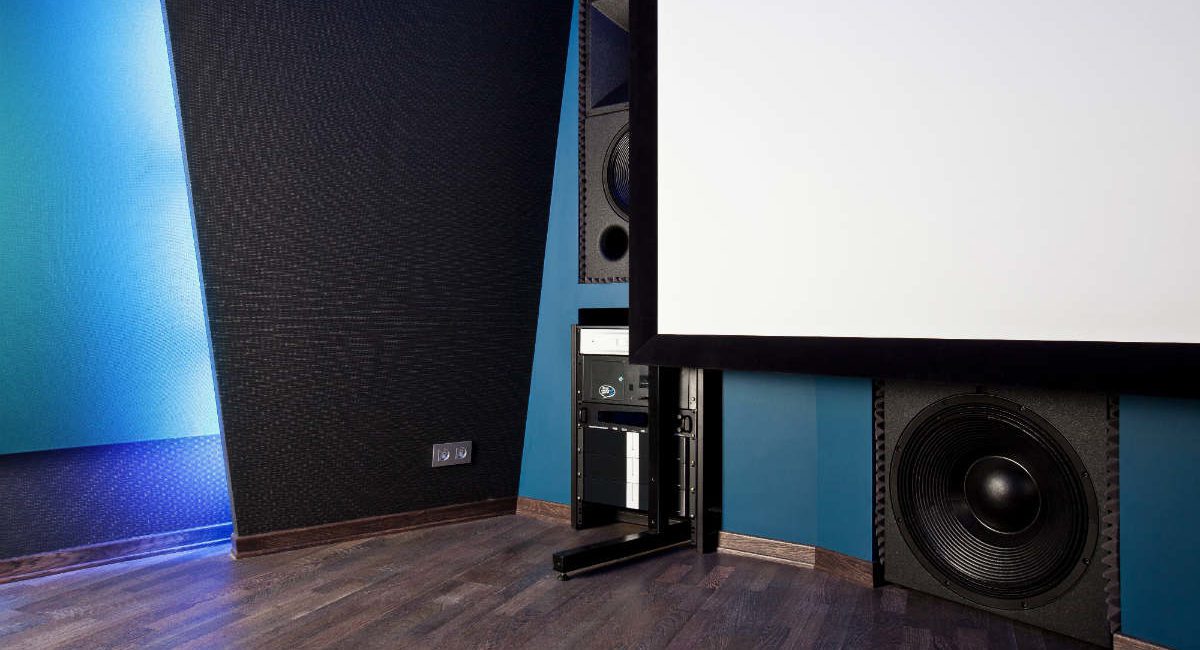 Paul Hales of Pro Audio Technology recommends placing large subwoofers in the front of a home theater and augmenting the largersubs with small subs setup as mirror points to help produce smooth and powerful bass.

Article:
Audio/Video | Content From Our Sponsor | Furniture | Speakers/Subwoofers
May 30, 2018

At one time it was enough for a surround sound system to include a subwoofer. Today’s multichannel audio systems are, however, a completely different matter. Multiple subwoofers are becoming increasingly common in modern AV systems, and in many cases the use of multiple subwoofers offer legitimate reasons beyond the testosterone value they bring to a system’s performance.

Reinforcing the science behind the practice and the aesthetic value, is the enhanced performance multiple subwoofers bring in terms of output and immersiveness with object-based surround content.

By arranging the subs symmetrically opposite each other along one or more of the room’s centerlines—width, length and height—integrators can largely ‘cancel out’ certain modes to smoothen low-frequency playback in home environments.

Elaborating on the practice of using multiple subs, Hales says this approach to room design requires multiple subs placed symmetrically about the centerline of the room, with all subwoofers operating in positive absolute polarity. This will position the subs within standing wave “lobes” of opposite polarity, thereby minimizing energy transfer to those modes.

Hales emphasizes this alignment effectively cancels certain modes, and notes that because of this phenomenon Pro Audio Technology advises dealers to utilize this installation approach if possible.

“At Pro Audio Technology we like to install four subwoofers optimally, with two larger, higher-powered subs on or along the front wall where you are seeing the image. You want the most power to come from where the listener’s eyes and brain are telling them the sound is occurring, and at least two more subwoofers placed elsewhere in the room,” comments Hales.

“We can talk about an additional trick to optimally place the symmetrical subs so you achieve further standing wave attenuation and get some additional energy in the back of the room to create full-range envelopment.”

A typical two subwoofer installation that Hales says integrators could offer clients – if the space and architecture allows – is an in-wall installation where the first sub is placed at 25 percent of the room width from the right front wall, and 25 percent of the room height from the floor. He says integrators can then place the second sub symmetrically opposing the first along the length and height centerlines, on the back wall. This “25 percent symmetrical alignment” positions the subs at the nulls of the second order length and height axial modes, which minimizes energy transfer to those modes, and the symmetry around the centerlines will drive certain other modes in antiphase, as described earlier.

If four subwoofers are available, this “25 percent symmetrical alignment” can then be duplicated on the side walls of the room, attenuating width modes.

Hales admits that placing subwoofers 25 percent of room height away from the ceiling is not always possible or practical.  In those instances, the subs can be placed at the wall-floor junctions, 25 percent in from the neighboring walls. Height modes will not be controlled, but it’s possible to control length and width modes using this positioning.

While videophiles obsess over 4K, refresh rates and high dynamic range (HDR), the audio side of the home entertainment market has focused on the singular sound advancement of immersive audio.

Sometimes called object-based surround sound because mix engineers describe the mixing process as the ability to place “objects” within any point of the soundstage, Dolby Labs has aggressively championed immersive audio.

Hales says that formats such as Dolby’s popular Atmos technology and DTS’ DTS:X format can absolutely benefit from the support of multiple subwoofers.

“Multiple subwoofers definitely complement object-based systems because they allow for more ‘distributed’ bass management. Object-based surround systems require more speakers in the room, and that in turn necessitates smaller speakers—It’s just often impractical to have many large speakers both from the physical and budgetary standpoints,” asserts Hales.

Hales says that regardless of the room environment, which are more diverse than ever before, multiple subwoofers enhance any listening space.

Underscoring the value of multiple subwoofers, he says that while not ideal, square room shapes that are used for daily home activities can be just as performance oriented as rectangular, dedicated theaters.

“Square rooms don’t affect the optimum number [of subwoofers], but they are horrible for standing waves,” he admits.

The important takeaway regardless of the room shape, usage or environment, is that a well-designed system that includes multiple subwoofers can help to mitigate some traditional acoustical problems, while enhancing the listening experience he adds.

Multiple Subwoofers: It’s All About the Illusion

Boiling the advantages of multiple subwoofers down to something that’s much more relatable to the general public, Hales emphasizes that multiple subs in a system simply delivers a more realistic experience.

“For me personally, the biggest benefit of multiple subwoofer systems in object-based systems is the impression of ‘full-range’ sound all around you in the immersive sound field,” he adds.

“It just makes for a better illusion. At the PRO Experience Center, we use four subwoofers in a 23-channel system to create a very coherent, contiguous ‘hemisphere’ of sound over and around the listener. This makes watching movies or concerts with well-engineered immersive soundtracks, shockingly convincing. You no longer feel like you’re watching a flat image with speakers around you. You feel like you’re in the scene. Multiple subs, as previously mentioned, can also allow for control of some standing wave modes too, so greater low frequency smoothness can be achieved.”