I may be an “old guy” too, but I like to rock, and after using the company’s new Sonetto line of products for music and immersive audio, I can happily admit that I was wrong: Sonus faber does indeed rock.

Not only does the product line rock, but it does so at quite a high level. Trying the company’s products in my analog stereo and my 7.4.2 object-based surround systems, I thoroughly enjoyed the speakers’ performance and elegant looks.

Taking a look at each of the models that were used for the review, the Sonetto III is a three-way floorstanding loudspeaker. Internally, the speaker features a 29mm DAD tweeter that includes a DKM diaphragm, along with a 150mm cellulose pulp and fiber midrange driver and a pair of 150mm aluminum-cone woofers. The 4-ohm Sonetto III is 89dB sensitive and it provides a frequency response of 42Hz to 25kHz.

The two-way Sonetto I utilizes the same 29mm tweeter and the same 150mm midrange driver that’s in the Sonetto III, and these drivers reside in a front-ported enclosure. Sonus faber points out the 4-ohm speaker is 87dB sensitive and it provides a frequency response of 45Hz to 25kHz.

Handling center channel duties is the Sonetto Center I. This speaker employs a two-way design with the same drivers as the other Sonetto speakers. Like other center-channel speakers, the Sonetto Center 1 places the 29mm tweeter in between the 150mm midrange drivers.  Like other Sonus faber speakers, the 4-ohm Center I features the company’s lute shape cabinets. In the case of the Center I, the cabinet incorporates a pair of rear ports that surround the binding posts.

The Center I is rated as a 90dB sensitive speaker, and it provides a frequency response of 60Hz to 25kHz.

Sonus faber’s 4-ohm Wall speaker is an on-wall speaker that provides a frequency response of 60Hz to 25kHz. The two-way, 89dB efficient speaker places the 29mm tweeter between a pair of 150mm midrange drivers in a vertical array.

Rounding out the system, the company also sent along the Gravis II subwoofer. This product uses a 350-watt RMS Class A/B amplifier to drive the unit’s 10-inch woofer. The approximately $1,500 subwoofer includes an LFE input, as well a line-level input and a high-level signal Neutrik four-pole Speakon input.

Moving into the setup process, the entire system didn’t take long to integrate into my home.

After unpacking the speakers, I started by assembling the floorstanding speakers’ outriggers, which only took a few minutes. From there I simply connected my speaker cables, which use banana plugs.

The only speaker that was unique was the Wall on-wall speaker. This speaker features spring-loaded binding posts that are placed in a small recessed cavity that were somewhat difficult to work with.

My side surround cables use spade termination and I was able to make the connection, but if I were mounting the speakers—I placed them on Auralex decoupling pads on a shelf that surrounds my listening area—I would have likely had to have used a different style of cable termination such as bare wire or pins.

In order to provide some insight into my home system I have two separate cabinets in my listening area. One cabinet holds an Onkyo Dolby Atmos cable receiver, along with an LG UltraHD Blu-ray disc player, a 4K Apple TV, and the other cabinet houses a stereo setup with Bryston electronics, a Cary phono preamp, a Meridian DAC that’s connected to a Sonos Connect and a Pioneer Blu-ray disc player I use to play CDs. The Cary phono preamp is connected to a Thorens TD-160 turntable.

All of these components live in a live end/dead end 13×23 foot room design.

In the theater system, I went through the receiver’s setup menu to set the speaker distances, levels and equalization. This process took roughly 20 minutes.

In total, it took me approximately a couple of hours to unpack, setup and fully install the multichannel Sonus faber speaker system.

Positioning the Sonetto IIIs for my stereo system (I just swap speaker cables) took only a few minutes using the placement of my Aerial Acoustics Model 6 floorstanding speakers as the starting point. 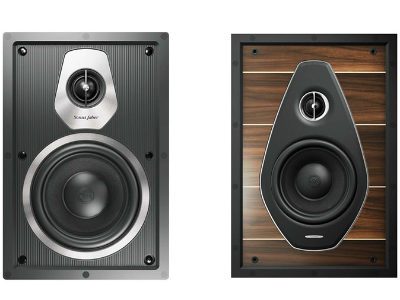 Driving the speaker system within my theater system, I used a multichannel processing mode and my 4K Apple TV to help the speakers break-in.

After a couple of weeks of simply running the system I began my listening using my stereo system that includes a Bryston five-channel 9B-ST amplifier setup in a biamp configuration to drive the speakers.

Listening to bands such as Audioslave, Tesla, Candlebox and Natalie Merchant, I thought the Sonetto IIIs via the combination of the Connect and Meridian DAC provided plenty of bottom end with a warm midrange and a nicely extended top end.

Mixing up my listening, I later listened to Chris Botti’s “In Boston” as well as AC/DC’s “Back in Black” on vinyl and via Amazon’s music service. The transparency and detail of the Sonetto III’s allowed me to hear the dynamic differences between the streaming version of “Back in Black” and the vinyl version of this classic album, as well as finer details such as the roundness of Cliff William’s basslines and the more “pointed attack” those same basslines offered in the streaming version of the album.

All this rock listening made me change my mind on what I thought Sonus faber speakers were … putting it bluntly they totally rock and my preconception was completely wrong.

Getting into some home theater, I popped in “Lord of the Rings: Fellowship of the Ring” on Blu ray and watched the Netflix series “Wu Assassins,” which offered a Dolby Atmos immersive audio soundtrack.

In both cases, the collection of Sonus faber speakers showcased how well their driver arrays were able to create a seamless, timbre-matched, immersive soundfield even with the non-object-basd DTS HD Master Audio soundtrack from the “Lord of the Rings.”

The Atmos soundtrack included with “Wu Assassins” featured lots of bottom-end that the subwoofer handled well. Using the well-mixed audio, the series includes lots of martial arts action that emphasizes lower midrange and bass to convey the impact of the combatants’ punches and kicks.

Finishing my time with the system with the UltraHD Blu-ray release of “Avengers Endgame,” I thought the center channel provided nice, clear dialog that nicely complemented the action the movie offered.

In my room I was able to get the sub to play down to 31Hz. It’s strongest levels of low-end extension were 40Hz, but when I added additional subwoofers, I was able to gain about 6dB more output to better balance the sub’s lowest extension of 31.5Hz.

Summing up what I stated earlier—yes the Sonus faber Sonetto speakers made me eat crow. The speakers performed nothing like my preconceived ideas based on bad tradeshow demonstrations. The Sonetto line of products are exceptionally engineered, they provide elegant looks, and the line provides a selection of products to need a range of music and home theater requirements.

My best advice is to check out the Sonus faber Sonetto speakers. If you do your homework I think you’ll be as impressed with the product line as I was. This is one case where I am happy that I was wrong.