One of the many relationships OneButton has cultivated within the architectural community is with Dan Brunn AIA. Collaborating with the L.A.-based architectural firm, OneButton has installed multiple Yamaha home theater and whole-house audio components into Dan Brunn's Bridge House project. 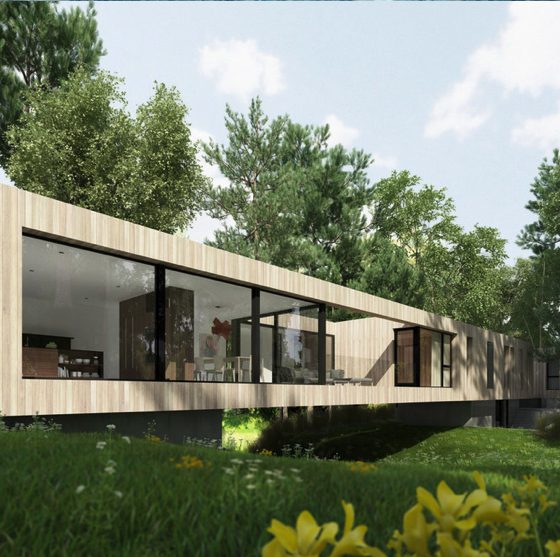 The latest technologies and product function that drive the industry are usually what custom integrators and installers like to sell in. For OneButton, the latest gadgets and functionality take a back seat to creating the living experiences that homeowners want.

The 11-year-old company, which started in Colorado, eventually expanded to New York and Los Angeles. Its growth is the result of a business approach in which OneButton has emphasized the ergonomic and architectural impact of electronics in home spaces.

Michael Izatt, co-founder of OneButton, and his partner, Matt Emmi, shared an apartment early in their career and were united in their common interests of architecture, photography and technology. These early talks would plant the seeds for their company.

Now as an established partner of the architectural community in multiple metropolitan markets, OneButton is growing its client list through its design-first philosophy.

Stepping back and looking at his position as a co-founder of OneButton, Izatt says that what separates his company from many residential installation firms is that OneButton isn’t focused on the gear.

“Our concept was how we could add technology into people’s environments and give them something to help improve their lives. What we discovered in doing this was a lot of saying ‘no,’ and removing a lot of the technology that our market has been traditionally based on,” Izatt says.

“Our clients don’t want all that technology, sometimes they just want to turn the lights on and off and listen to music. Certain rooms shouldn’t have the sophistication that technology brings and others might require it – a TV in a dining area will lessen the human interaction between people, while in an entertainment room, a TV is the focus of the room.”

The company has developed a trust for top brands such as Yamaha, and it has built a client base that’s followed it from its beginnings in Colorado to its current locations in New York and Los Angeles.

“We approach it as, ‘what is the minimum to achieve the client’s specific goals.’ That’s really resonated with clients. We had a client that moved to New York and wanted us to do their work, then we started to work with an architect and that firm started to bring us into all of their jobs [in New York],” he says.

“More recently, I decided to get out of the cold of New York and moved to Los Angeles.”

Izatt explains that the company built a client base by sticking to its minimalist approach, providing solutions that are powerful and easy to use. This he says has led to a lot of architects bringing OneButton work because they don’t want to work with anyone else.

“We don’t put touch panels all over the house … it’s really all about keeping the walls clean. We are focused on the design and experience that aesthetics influences.”
—Michael Izatt, OneButton,

Staff members work with CAD drawings and other materials that are commonly used by architects to help maintain an efficient workflow, while understanding the objectives of the architects.

With one of its current projects, Bridge House, the company has cultivated a relationship with the firm Dan Brunn Architecture and deepened its integration with Yamaha. Dan Brunn, AIA, is a Los Angeles-based architect with many notables in the city including Flip Flop House in Venice, Calif., and a renovation of a Frank Gehry house. Dan Brunn Architecture is currently developing a striking, 4,500-square foot home in the Hancock Park area of Los Angeles.

For its part, Izatt says OneButton will employ its design experience and minimalist approach through the implementation of a separate control system that complements today’s lifestyle considerations.

“We don’t put touch panels all over the house … it’s really all about keeping the walls clean,” he notes. “We are focused on the design and experience that aesthetics influences.”

Music is part of the house’s experience and design. To deliver sound in nearly every room, OneButton installed Yamaha products strategically, including entertainment focused areas with an AVENTAGE AV receiver with surround sound in the master bedroom and in the den, MusicCast wireless amps, and numerous in-ceiling speakers throughout the house.

Given OneButton's design philosophy, Izatt says its equipment choices are predicated on their ability to integrate into interior spaces.

“We are invested in the human experience of a project as much as the architect is. That is our primary concern,” he admits.

“Our design team is made up of architectural school graduates who have an interest in tech versus audiophiles and programmers. Our history with Yamaha stems back to where we began. Our focus was on simplicity and Yamaha YSP soundbars were ideal as they could produce such an amazing surround experience from just one piece. Yamaha amps are also a go-to for us also when it comes to Hi-Fi stereo setups.”

Izatt says the company’s brand choices often come down to streamlining the purchasing process to buy from as few vendors as possible. Throughout the growth of the company he adds that OneButton has consistently used equipment from Yamaha.

Check out some of OneButton's design work in the slideshow!

Interestingly, Izatt states OneButton tries to avoid using in-wall speakers because in most cases they can be obtuse to the eyes from a design perspective – and they would rather use elegant bookshelf speakers, which can add character to a space.

From an engineering perspective, the systems the company specifies are designed to fill spaces with clean and articulate sound that serves as a means of creating an atmospheric environment.

Moving onto theater types of spaces, Izatt says the company often designs homes with one room where homeowners can enjoy a great picture and sound.

In these cases, he emphasizes the company’s goal of designing a space that people want to congregate in to enjoy their TV watching in order to minimize the placement of TVs throughout a house.

Additionally, OneButton remains consistent and employs the same design philosophies to outdoor and commercial environments too.

Through his experiences as a small business owner, Izatt says that he has learned that it is important to listen to clients and not to let your passions and/or businesses' preferences interfere with client goals.

For customers who are deciding on what they want, either to personally install or have installed professionally, Izatt has some advice.

“Identify your needs and separate them from your wants and shiny things that look cool. Get down to the core of what you need if you are doing it on your own. The questions that comes before that are: What do I really want to do? How do I interact with technology? Do I want shades knowing they’ll be expensive? Do I want music and where do I want the music? Then I can choose one spot that’s my high-end area,” he says.

“Asking those questions first before jumping on whatever equipment is a good place to start. Try some different solutions for the things that are important to you. Once you figure out the questions then you can go all in.”