Sometimes it is easy to overlook testing and calibration, but these aspects of the installation process are critical to system performance and an integration company’s success.

Helping integrators to troubleshoot, test and calibrate the audio and video systems they install is Murideo. At the recently completed CEDIA Expo 2021 Expo in Indianapolis, the Sioux Falls, S.D.-based company demonstrated several testing solutions that includes a new audio testing bundle, as well as a new HDMI 2.1 test tool.

Manning the company’s booth during the show was Jason Dustal, who is an Image Science Foundation (ISF) certified professional and ISF instructor. Pointing out a few of the new products in the company’s booth Dustal emphasized the importance of testing and calibration, and he stressed the value of the company’s new MU-SIX-PAIR 8K HDMI 2.1 testing product.

“We are over at the Murideo booth showing off some of our newer products—some of our tried-and-true products; doing a few demos here, display calibration, and those types of things,” explains Dustal.

“One of the things that we wanted kind of to point out that is brand is brand new; we are now able to best HDMI 2.1. So, when you have things like 48Gbps HDMI cables, we want to be able to test those cables to make sure they are doing what they are supposed to do.” 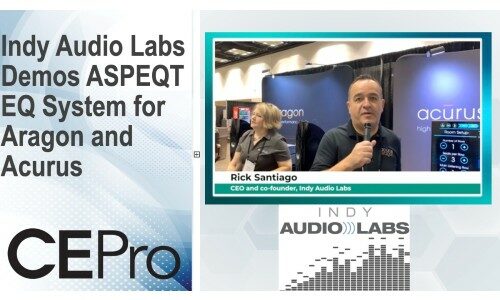 Other testing kits on display in the company’s booth included the MU-TEST Audio package. Murideo says this new test kit can be used to calibrate home theater audio and it comes with built-in signal generation and a multi-input microphone preamp designed for use with Apple’s iOS operating system.

The audio test kit also comes with four calibration microphones, and the company says it can be used with Studio Six Digital’s AudioTools app.