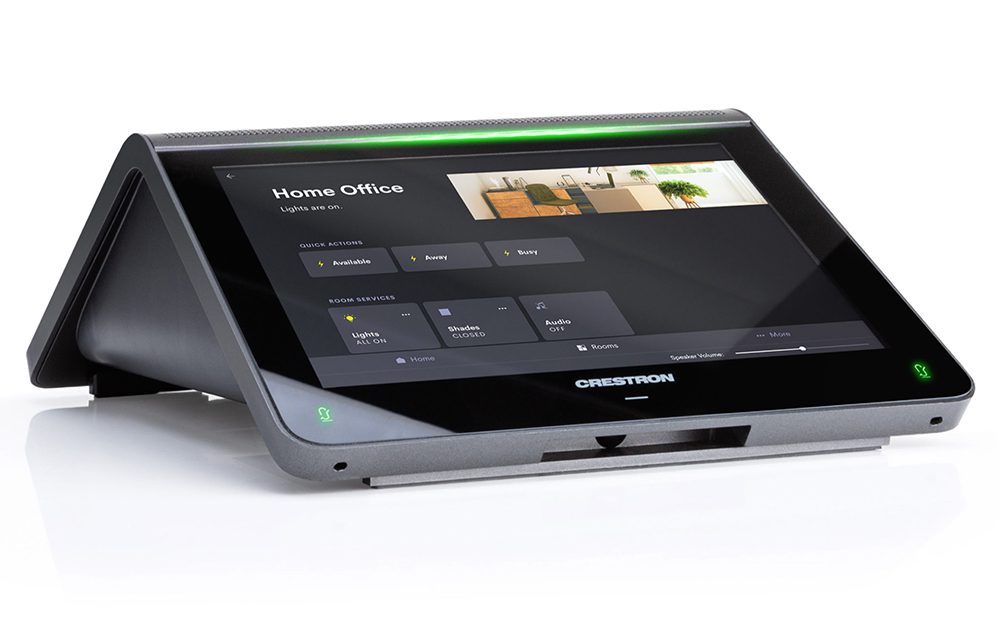 In the residential market Crestron is known for its customizable control and automation systems, audio systems and various other solutions.  The company is just as well-known in the commercial AV industry for its industry leading enterprise technology products.

Bridging the residential and commercial markets, the N.J.-based manufacturer recently introduced its MM30-R Audio Conferencing Solution that provides the power of a commercial collaboration tool with the convenience of a home control tabletop touch panel.

Sending me an MM30-R, I integrated the conferencing system into my Crestron Home control system.

Using the MM30-R for the past couple of months I’ve been conducting all of calls with the device and using it as a system interface option to control my AV system and its devices.

The tabletop MM30-R Home Audio Conferencing System features a built-in speaker, along with a four-array microphone array that captures sound in a 360-degree sound field.

As part of its integration into Crestron Home, the MM30-R also incorporates a built-in 7-inch, high-resolution touch screen, and it works with PCs and Apple computers.

It’s important to note the control aspect of the MM30-R. Through the unit, users can control everything from their lighting and HVAC, to their AV components and security cameras.

Setting up the MM30-R is easy. After unpacking it from its box, I used PoE (power over Ethernet) to power the unit.  With the MM30-R up and running I logged the unit onto my network and once it was on my network it discovered my Crestron Home system.

Once the MM30-R discovers a Home system it will populate that system’s control functions within a few seconds.

I would estimate it took roughly 10 minutes to unpack, power up and place the MM30-R on my network with full Home functionality. Realistically, the MM30-R is about as turnkey as any home electronics device you’ll ever run into.

Elaborating on the simplicity of the MM30-R: When I want to use it for my conferencing activities, all I need to do is connect it to my MacBook Pro. Using a USB-C hub I plug the USB from the Home Audio Conferencing System to my computer.

After opening up “system preferences” I simply selected “sound,” then I selected “Crestron Speakerphone” as the input, and I did the same thing to select the audio output. The MM30-R will light up green once it is connected to a computer and that’s all of the setup required.

Following that initial setup, subsequent conferencing sessions did not require me to select the input and output for my MacBook.

Most of my conferencing sessions with the MM30-R have been done using Zoom. I’ve also done some calls using Microsoft Teams, and I even did a remote parent/teacher conference using Google Meet. Regardless of the conferencing platform my experience was the same in terms of the hardware. The only usage differences I had involved the differences between the conferencing software tools.

What’s nice with the MM30-R is that I can be to the left or to the right of the unit and my spoken voice still comes out clear. The speaker delivers clear audio that also enabled me to listen to people on their other end of the conference calls without having to crank up the volume.

In my home I am typically three-to four-feet to the right and away from the MM30-R during my conferencing sessions. Despite the distance and me being off center, I have not noticed any drop off in the quality of the audio.

I’ve also used the MM30-R in situations in which I’ve let the battery in my Crestron TSR-310 remote run down. In these cases, I’ve controlled my AV system, including powering up and powering down the system; I’ve selected sources and adjusted volume. I’ve also adjusted my room’s lighting with the interface portion of the Home Audio Conferencing System.

One other way I’ve used the MM30-R is born out of pure laziness on my part. I’ll use the speaker to listen to streaming radio and YouTube from my computer in the event that I don’t want to turn on my audio system. 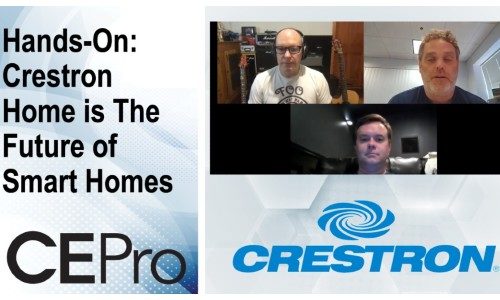 Related: Hands-On: Crestron Home is The Future of Smart Homes

Perhaps the only thing I’d like to see from the MM30-R is another power option. If there were a way to power the unit via a rechargeable battery to eliminate the cable run to the MM30-R I think that would provide more placement options within home spaces.

Given the shift into today’s work environment, it’s hard to see a scenario in which the MM30-R wouldn’t benefit Crestron Home users. Through its ease of setup, its intuitive interface and overall sound quality, I think the MM30-R Home Audio Conferencing System is the perfect support tool for WFH employees.