Working with the design community to develop products like The Frame Series of televisions, Samsung is breaking down the hurdles that used to prevent the integration of technology into modern interior design spaces.
Robert Archer
Article:
Audio/Video | CEDIA Expo | Displays | Events | Home Theater
September 14, 2020

Samsung is a large, global electronics company that is known for its televisions, soundbars and smart devices. Through the launch of its Frame series of television products, the company is building a following within the home design community and integrators stand to benefit by the company’s growing appeal.

James Mayo, senior director of custom install/channel strategy at Samsung Electronics America, states that over the past several years the company has worked hard to balance the traditional elements of television product development, with the needs of the interior design community.

Headlining Samsung’s effort to bridge the differences between the electronics industry and interior design community has been the company’s hugely successful The Frame line of products.

Available in a growing selection of screen sizes, The Frame line of products were developed to integrate into home spaces without looking like a traditional television.

The Frame line of products are capable of displaying fine works of art through the use of Samsung’s QLED display technologies, and proprietary Art Mode technology, which provides homeowners a choice of more than 1,200 works of art to show at their convenience.

“When Samsung first came out with The Frame, we only had a few screen sizes. But we quickly saw demand for additional sizes far exceeding our offerings; just like with typical televisions, people want The Frame in different sizes for different purposes,” comments Mayo.

“[The] 55- and 65-inches were always our best-selling screen sizes, so this year we went all the way up to 75 inches, which has been received really well.”

Not only does Samsung now offer the 75-inch screen size model, but it also went the other way, by introducing a 32-inch screen size. Mayo notes the smaller screen size enables homeowners to place their The Frame TVs in locations such as kitchens and smaller bedrooms. 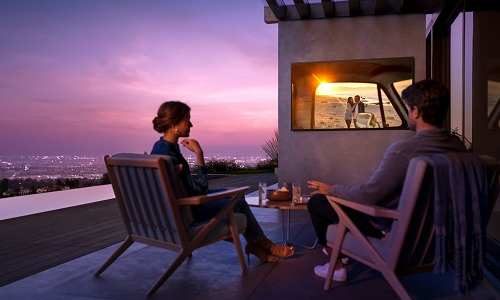 In addition to the research and develop (R&D) efforts the company has put into The Frame series of products, Mayo stresses that Samsung is also supporting the merger of home electronics into interior design spaces, by opening up design centers across the U.S.

“Whenever we talk to designers, we often find that they are kind of hardwired to avoid technology a little bit. It’s one of the things that we’re trying to get the design community warmed up to,” he says.

“We’ve opened up four different design centers. One in Irvine, Calif., one in Washington D.C., one in Ridgefield Park, N.J., at our headquarters, but the newest one we built is down in the Dallas Market Center in Dallas, Texas. We’re trying to bring in designers and give them the chance to work out of the center whenever they want. They can come see different rooms with different Frame setups; designers can see how it becomes a seamless part of their design.”

Mayo adds that initially when Samsung designed the Frame line of products the company envisioned the products as secondary TVs within a home, but they were surprised to learn that because of the visual elements the products delivered, homeowners were using the TVs as their primary displays.