Going from 18Gbps to 48Gbps is nothing to take lightly, so can you trust these cables to live up to their specs? DPL Labs' Jeff Boccaccio weighs in on the issue.
Jeff Boccaccio

More companies are now advertising their new passive 48G HDMI cables. Many are only 1, 2 and maybe 3 meters long, and some claim gauges as little as 28 and 30 AWG. This is quite extraordinary when you consider 5-meter products tend to struggle to make 18Gbps under our current Rev 2.0 format. Is there some new magic sauce alloy being introduced? We measured these 18Gbps products and they do in fact get by.

Still, going from 18Gbps to 48Gbps is nothing to take lightly. To get a better understanding, look a little closer at the details. Sometimes when determining HDMI qualities people use the aggregate data rate of all the channels that make up the interface.

When comparing 18Gbps and 48Gbps, using this approach makes things look worse than they really are. For instance, if we take our 18Gbps specification and divide it by the three TMDS video channels D0, D1 and D2 we come up with 6Gbps per channel. If we use that same example with 48Gbps the per-channel number, it becomes 16Gbps — more than 2.5 times that of 18Gbps. However, the real number isn’t 16Gbps; it is only 12Gbps.

The reason is that under Rev 2.1 48Gbps specification we are no longer considering just three channels. Instead, one was added by stealing the clock channel and using that as D3. We still need a clock, but that can be embedded into the signal. As long as the clock channel can handle 12Gbps, all is good. In the earlier years of HDMI, this channel was never designed to do this since it was only supporting the lower frequency clock. But more manufacturers are replacing that channel with the same type of wires used for D0, D1 and D2. This can go for optical also, at printed circuit board level.

Even doubling the data rate is quite a challenge, though. Back in the Rev 1.3 days, when the data rate increased from 1.48Gbps to 3.4Gbps everybody gasped. To support the higher data rate, HDMI increased the cable spec from Cat 1 to Cat 2 and added a corrective amplifier stage in a form of equalization to the display (sink). This was a major development and worked extremely well. Then came Rev 2.0 with data rates doubling again — and a new EQ system was employed, still using Cat 2 cable, and we were back in business.

Now we’re ramping up to 48Gbps, so you know there will be some form of cable improvement (Cat 3) and EQ supporting this. With these additions, things can get complicated. For instance, with the current Rev 2.0 cable, there may be some in the field claiming 24Gbps throughput now. When it operates under Rev 2.1 and the system has a sufficient clock channel that can handle 6Gbps, all should be smooth. But what about 32Gbps, 40Gbps and 48Gbps?

Test Results Can Help and Hurt

With Rev 2.1 the total bandwidth of the interface has exploded to a dynamic range never seen before. The illustration gives you a better look. Starting with Rev 1.0 in red and going to Rev 2.1 you can see how wide the overall operating envelope has become. How does one divvy up the correction EQ over this super broad response factoring in amplitude variations, data rate and EQ levels? 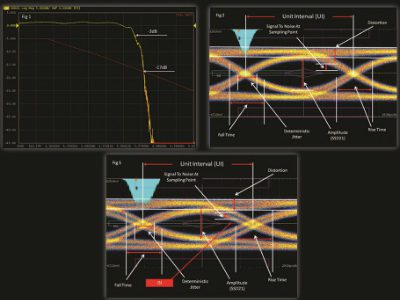 There’s a lot going on inside the interface and the work to test it goes up substantially to 26 test setups per DUT (Device Under Test). Use five samples, for consistency, and you end up with over 125 test setups. Automation software can speed this up, with only one drawback. It can read and take numbers, but the heavy lifting is in how they are processed, understood and scored. We’ve learned that some test numbers can help or hurt others … you may be able to monitor every heartbeat, but what about heart murmurs? There has to be some form of comparative analysis on many of these numbers.

DPL uses its Argumentative Matrix to do this job. For batch quantity work, the standard automation process is good as long as the manufacturer does not want to know the real score on the product. Is the DUT good, fair, bad, needs improvement, or close to bad, or off the charts in high performance? The place to be is off the charts.

Remember, it’s all about reliability — the industry needs to be proactive here and not be content with fair performance.