Integrators are doing more outside technology installations than ever, so it’s vital they establish best practices for deploying outdoor technology solutions for their clients. Earl Naegele, managing director, commercial sales for Peerless-AV, outlined some of the biggest mistakes he sees being made when installing outdoor video.

“I would say there’s three oversights that are common with regard to integrating outdoor televisions or outdoor digital signage into either a residential atmosphere or commercial space,” says Naegle.

The first, he says, is not using a purpose-built outdoor TV for the job. Displays like Peerless-AV’s Neptune Shaed Series Outdoor TVs are intended to be deployed 24/7 outdoors in shaded areas, such as under a gazebo.

“What we’ve found through our fifth generation of televisions is most people in the residential or light commercial space are viewing an outdoor TV in an outdoor environment but with some sort of protection from the sunlight,” he notes, point to applications like a backyard veranda as a prime example.  It’s vital that integrators recognize which outdoor displays are suitable for direct sunlight applications versus in a sheltered and shaded patio.

Naegele says the second biggest error he sees is incorrect installation or poor placement. Outdoor TVs are exposed to the elements, so having a solid mounting setup is important for safety reasons.

“In an outdoor environment, you have to contend with rain, sleet and snow year after year of weatherization, so you want to make sure that you place the TV in a safe and secure manner so there’s no shear effect where the TV can drop, fall on someone, or fall and break. If you’re investing in a tilt mount or articulating to share the TV either in a downward tilt to reduce glare down to a seating area or for a large viewing area such as an outdoor pool, you might want to have an articulating mount. Indoor mounts are built for indoor use; they’re not purpose built to protect the mount from weather such as snow, sleet or ice,” says Naegele. 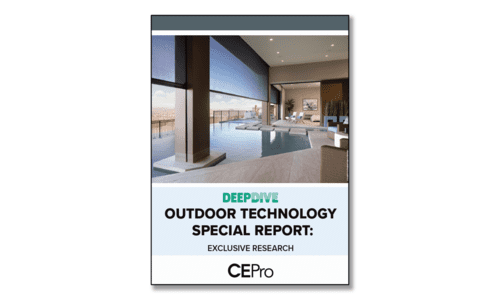 The Neptune by Peerless-AV brand’s new line of outdoor televisions offers a choice of 55-, 65- and 75-inch screen sizes. The displays ship with Neptune Outdoor Tilting Wall Mounts, which are valued at $199. The Neptune by Peerless-AV is designed to live year-round in outdoor environments in areas such as backyards, patios, pool areas and kitchens. Underscoring the products’ ability to live outdoors, the Neptune Shade Series of Outdoor TVs are designed to withstand wind, rain, snow, and temperatures ranging from -22 to 122 degrees.

According to the Naegle, the outdoor TVs are powered by LG Displays and they provide 4K USD resolutions, along with IPS panels, and 178-degree viewing angles. The TVs also support homeowners’ ability to stream their favorite AV content via their favorite streaming devices through the company’s freePATH technology, which enables Wi-Fi signals to easily access streaming devices.