Thermal Imaging: The Most Underutilized Tech Tool for Security, Surveillance and IoT Applications 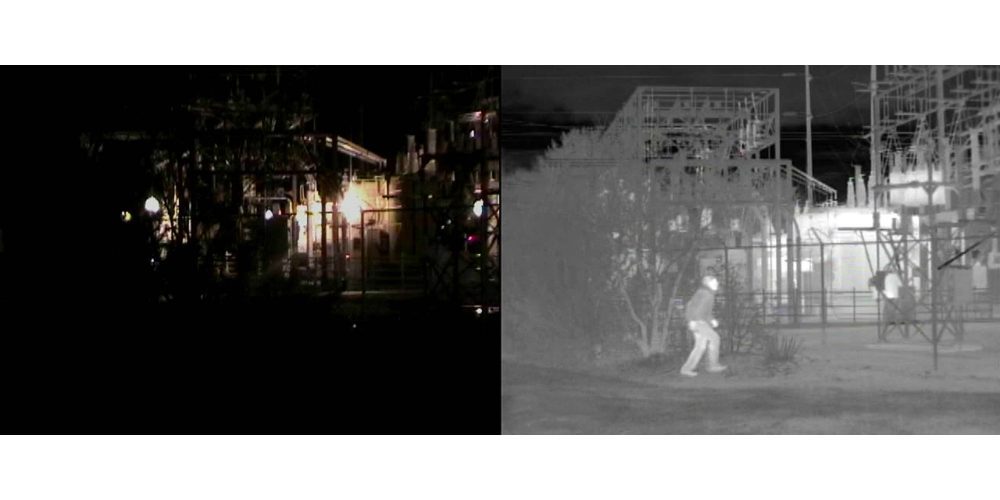 A big drawback to cameras that create images using visible light (left) is their reliance on the amount of available light.

Thermal Imaging: The Most Underutilized Tech Tool for Security, Surveillance and IoT Applications

The objective of security is to protect people, locations and assets, and for the threats organizations face daily, early detection of potential problems is crucial. Security staff and third-party monitoring providers rely on alerts generated by intrusion detection technologies as the lifeblood of security.

As helpful as these alerts can be, the unfortunate reality is they are often pain points. The number of false alerts from intrusion detection solutions can quickly become overwhelming for central station operators and law enforcement, especially for outdoor monitoring situations. Weather, animals, foliage and other factors can easily generate false positives.

The best approach to mitigate false alarms is to ensure accurate identification, which not only helps identify valid threats but also increases the effectiveness and efficiency of response. The sooner a response can be put into action, the more likely it is that an organization can mitigate or avert a potential risk.

Unfortunately, verification is another major pain point that creates significant challenges for organizations using many of the available intrusion detection technologies, delaying and hindering critical response.

With these issues in mind, it is important security professionals and end users properly evaluate and select technologies that will augment security by reducing the number of false alarms and increasing both detection and identification.

This will help ensure responders are only dispatched for true alarms, maximizing resources and streamlining first response efforts.

A burgeoning means to reduce nuisance alarms through accurate intrusion classification and visual alarm assessment is the application of remote monitoring with thermal analytics.

Read on to learn why thermal cameras, especially when combined with other security technologies, are fast becoming attractive options for installing security contractors and central stations.

There are a number of technologies typically deployed for intrusion detection, including visible light cameras and motion detection technologies like fence-mounted sensors, microwave and more. While each has its strengths, there are also a number of drawbacks to using any one of these solutions in a standalone capacity. 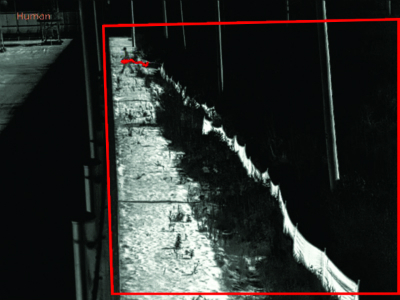 The main advantage of cameras that create images using visible light, such as conventional surveillance or IR-illuminated cameras, is the images they create are recognizable and easy to interpret.

This familiarity makes them a more comfortable choice for end users. However, when it comes to detection, customers face a number of challenges.

The primary drawback to these cameras is their reliance on the amount of available light.

In sunshine or a brightly lit scene, visible light cameras perform fairly well. But in shadows, at night or in another situation where lighting is less than ideal, objects can appear faint — if they appear at all.

Another limitation of these cameras is visual contrast. Because they capture only visible light, they can easily be fooled by visual camouflage or situations where similar patterns or colors blend together to obscure people and objects.

Similarly, these cameras are also susceptible to being fooled by naturally occurring phenomena such as trees, shadows, animals and other factors.

For example, when a motion sensor is tripped, security personnel would still require additional information to assess the nature of the alarm, determine whether it is valid, and plan an appropriate response. Without a visual of the scene, there simply is no way to know whether motion on a fence is an intruder, an animal or a tree branch.

Cameras can capture hidden menaces inside the house. Thermal imaging can “see” anything that emanates heat, such as electrical shorts, water leaks and bad guys. Integrate a thermal-imaging camera with an if/then engine like IFTTT, and users can automatically be notified if there is unusual activity behind the walls.

Another notable perimeter application technology increasingly deployed across all sectors is thermal imaging. By utilizing thermal cameras, facilities can detect intruders from greater distances regardless of light and environmental factors, giving security forces more time to react and respond.

The reason for this is that thermal imaging cameras don’t suffer the same problems as visible light, IR-illuminated cameras and motion-detection solutions.

Thermal cameras clearly “see” the invisible heat that radiates from everything we encounter in our daily lives, creating images from these heat signatures.

This allows thermal imaging to provide clear visuals in complete darkness. And because thermal radiation can penetrate visible barriers like smoke, dust, fog and other phenomena, thermal imaging is largely immune to their presence. For these reasons, thermal imaging is one of the most effective 24/7 surveillance technologies available today.

For example, an intruder located in a densely wooded area would be difficult to detect using a visible light or IR-illuminated camera. With a thermal imaging camera, on the other hand, the person would be clearly visible because of their heat signature.

Thermal security cameras let people see what their eyes can’t: invisible heat radiation either emitted or reflected by all objects, regardless of lighting conditions.

Because they see heat, not light, thermal cameras are effective tools in any security setting. They can easily detect intruders and other potential hazards in any weather, as well as day and night.

The reliability of any camera as an intrusion detection solution lies in video analytics, which employ predetermined algorithms to process digital images in an attempt to identify objects or activities of interest. Video analytics can be helpful but it does depend on the quality of the video, which is contingent on the available light and can be problematic for traditional security cameras.

Reliability can be significantly compromised when there is a fluctuation in lighting, low-light conditions or common natural occurrences such as wind, precipitation or the presence of insects, especially at night. This has a direct impact on the number of false alarms generated by visible light and IR-illuminated cameras.

A comparison of the same image using an IR-illuminated camera, left, and thermal camera. The person captured with the thermal camera is visible because of their heat signature.

A comparison of the same image using an IR-illuminated camera, left, and thermal camera. The person captured with the thermal camera is visible because of their heat signature.

Today, more thermal cameras include embedded military-grade analytics to detect and identify people, vehicles and other objects of interest. Thermal contrast is usually larger than visual contrast, allowing video analysis software to more accurately determine the cause of a motion or intrusion alarm.

This results in highly accurate triggers for tripwires, exclusion zones and temperature alarms, providing a much lower rate of false alarms. With thermal cameras, wind-blown branches, deer bumping against a fence or insects on a camera lens no longer trigger unwanted alarms.

In addition to its technological capabilities, thermal cameras require less infrastructure for deployment than other traditional perimeter systems, making it a more attractive option for installers.

Where fiber optics and fence detection systems require extensive cabling, thermal cameras can be deployed using existing infrastructure, which significantly reduces installation time and cost. And because thermal cameras are able to see in low-light or complete darkness, there is no need to install lighting poles and/or external illuminators. These factors alone can add up to substantial cost savings for end users.

Thanks to the excellent range performance of thermal cameras, customers who choose systems based on thermal imaging require fewer cameras than would be necessary with visible light cameras.

This reduction translates into cost savings on mounting, power, video feedback connection and, by extension, installation expense. Because a business can keep its infrastructure simple, maintenance costs are also minimized moving forward.

In light of all these factors, the effectiveness of thermal imaging cameras for intrusion detection is indisputable. However, their performance can be further enhanced by integrating video analytics and other sensors to form a more powerful solution, including situations where thermal cameras can be used to augment existing technologies.

For example, buried RF cable or fence-mounted fiber-optic sensors bring the potential for a high rate of nuisance alarms. Where these solutions are deployed, thermal cameras can be integrated to work in cooperation with these technologies to significantly lower their level of vulnerability while rejecting potential alarms generated by innocuous disturbances.

Beyond enhancing other systems, innovations in thermal camera offerings have made the technology more accessible to commercial users. In the past, thermal cameras were built to meet the needs of large enterprises whose perimeters spanned miles in length.

When you factor in the benefits associated with deploying thermal cameras, including accurate detection, sharp imagery, reduced equipment and ease of installation, a strong case is made to apply these cameras for small and large enterprise intrusion detection.

Today, there are thermal cameras built for smaller perimeters, where wide area monitoring and intrusion detection within 150 feet are the priority. These solutions have made it possible for car dealerships, construction sites, agricultural facilities, marinas and other commercial businesses to implement thermal technology.

In fact, the latest of these thermal solutions for commercial businesses combine several security technologies, such as optical cameras, analytics and two-way audio. The defining capability of these multispectral solutions is that integrate they with central station platforms for remote monitoring and alarm verification.

As such, these comprehensive solutions that feature thermal allow integrators to increase their recurring monthly revenue (RMR), central stations to expand their customer base and commercial businesses to experience a new level of outdoor protection.

Because these integrated solutions include thermal sensors and built-in analytics, security personnel can set up virtual tripwires, exit or entry detection and other advanced spatial rules to deliver the highest level of security possible.

Moreover, the optical sensors and two-way audio capabilities enable remote security guards to accurately identify and speak to a suspect.

Central station operators can then determine whether an approaching individual is an intruder or an employee.

The combination of these technologies in one solution results in greater threat detection, crime deterrence and loss prevention for commercial businesses, positively impacting the bottom line.

When you factor in the benefits associated with deploying thermal cameras, including accurate detection, sharp imagery, reduced equipment and ease of installation, a strong case is made to apply these cameras for small and large enterprise intrusion detection.

As security professionals grow in their understanding of thermal technology as a reliable means for perimeter protection,  more industrial and commercial market applications figure to emerge.

John Distelzweig is General Manager and Vice President of Security for FLIR Systems.