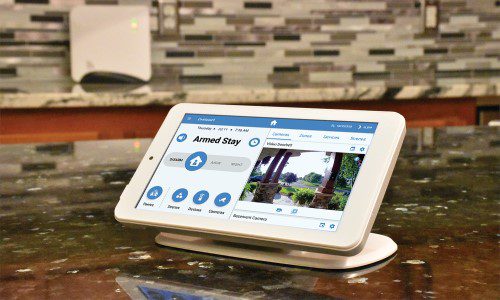 The Slimline touchpad features the same look and functionality of the Alula smartphone app, giving end users a single interface whether they’re home or away.
Article:
Products | Security
November 15, 2019

Alula, a provider of smart security and automation systems for professional installers, announces the release of its Slimline touchpad, which offers in-home interactive control for the Connect+ Hub and the BAT-Connect communicator.

The seven-inch touchpad enables real-time command of intrusion security, video cameras and automation devices, and can easily be mounted on tabletops or walls with a power supply utilizing existing wiring in the home or business, according to the company.

The device features the same look and functionality of the Alula smartphone app, giving end users a single interface whether they’re home or away.

“Customers expect an intuitive, digital interface that offers them complete visibility and control of their security, video and home automation,” says Brian McLaughlin, CEO of Alula. “With the Slimline touchpad, security pros will be able to offer a sleek, beautiful control panel that can be placed anywhere in the house, on the wall or any flat surface.”

The Slimline touchpad controls every aspect of a modern security system, delivering an at-a-glance view of video feeds, Z-Wave devices and intrusion and environmental sensors, according to the company.

When paired with the Alula video doorbell, customers receive a notification when someone rings the bell and can then answer the door on their Slimline touchpad and engage with the visitor.

The device pairs with a BAT-Connect communicator to update legacy security panels that previously featured an old fashioned keypad. The Slimline touchpad is also integrated with Alula’s Connect+, the security video and automation hub that is tailored onsite to serve the unique needs of each customer, or which can arrive fully loaded for optimal ease of installation and use, according to the company.

Alula says Connect+ is the only security hub that incorporates Cat-M1, the low-power, low-data technology that maximizes efficiency of the 4G LTE cellular communication path, offering enhanced coverage for better reach into challenging locations. Cat-M1 will also be compatible with 5G, meaning devices won’t be rendered obsolete by the cellular sunset.