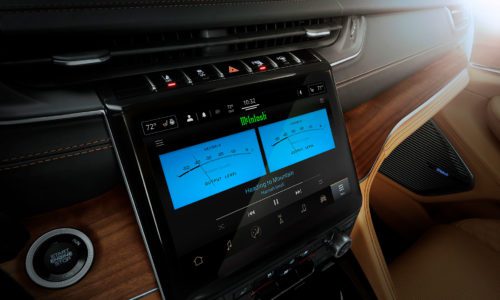 The 2022 Jeep Wagoneer will be available with a McIntosh audio system that features "23 tuned speakers" and a 24-channel amp that produces 1,375 watts of power.

Partnering with the automotive company Jeep, McIntosh Labs has announced that it has developed a pair audio systems for the 2022 Jeep Wagoneer.

McIntosh says its new automotive systems include the MX1375 Reference Entertainment System (RES) and the MX950 system, which will be available in the Wagoneer and Grand Wagoneer models.

Taking a closer look at the two systems, McIntosh points out MX950 incorporates a host of “MAC” technologies. The MX950 incorporates 19 “custom-tuned” speakers that include a 10-inch subwoofer and a 17-channel amplifier that produces 950 watts of power.

During the development stages for the systems McIntosh emphasizes that its acoustic engineering team worked on prototypes of the Wagoneers’ cabins in order to create the best possible experience.

“When we were developing the MX1375 Reference Entertainment System, we set up a McIntosh Reference room next to the Wagoneer team’s facility to ensure the best parts of the home system experience made it into the Grand Wagoneer,” comments Charlie Randall, president of McIntosh Laboratory, Inc.

“It was fascinating to hear the progression as the vehicle started to take on qualities of the Reference Room itself. I can’t wait for customers to hear and feel it for themselves.”

McIntosh adds that other elements of the systems include aesthetic touches such as the inclusion of its famous blue meters that will be a part of the systems’ “infotainment display.”