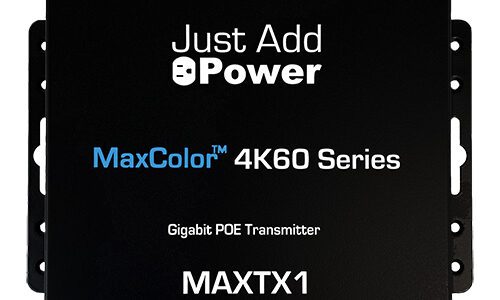 At the upcoming InfoComm 2021 show in Orlando on Oct. 27-29 Just add Power will showcase its MaxColor 4K60 transmitter and receiver series, as well as its Advanced Matrix Programmer (AMP) software for multicast switching systems.

Just add Power states that in addition to showing those new products during the annual trade event, it will also display its 2GΩ/3G ST1 Sound Transceiver, Warp Engine, and its partnerships with Aveo Systems, Enado, and Luxul.

According to the company, the MaxColor 4K60 transmitter and receiver series natively supports 4K at 60Hz in and out, and the solutions also support 12-bit color over a Cat-5 or Cat-6 cable. Just add Power points out the products are capable of supporting MPEG downstreaming for connected devices that include computers and smart devices, and the product line provides instant seamless switching, 4K upscaling and downscaling; compatibility with all audio formats, and HDR management for formats that include Dolby Vision.

The signal distribution company notes that in addition to its MaxColor 4K60 transmitter series, it will debut its AMP software for environments with existing infrastructure or special network environments that don’t allow for dedicated AV distribution switches.