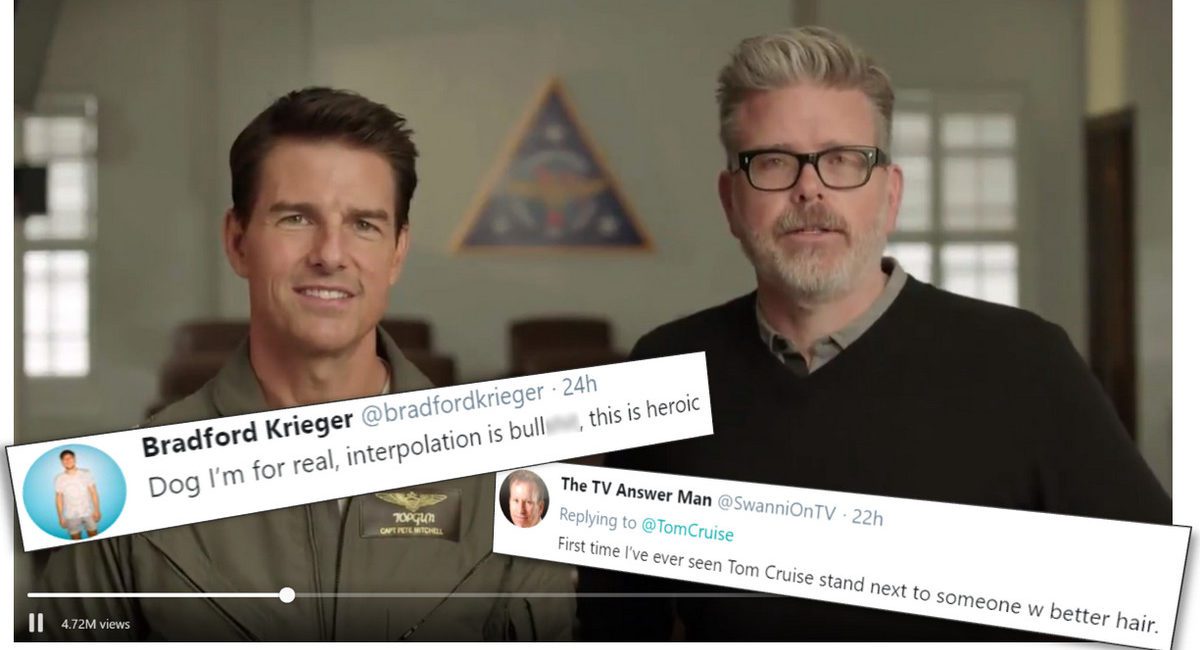 Tom Cruise, worldwide film star, producer, and…custom integrator? Well, sort of, as the actor took to Twitter recently to discuss his new movie, Mission: Impossible Fallout, and how it should best be viewed on an HDTV.

The tweet features a video where Cruise, alongside Mission: Impossible Fallout and Top Gun: Maverick writer Christopher McQuarrie, go over why the film industry dislikes the video interpolation (or motion smoothing) option in most modern HDTV sets.

“The unfortunate side effect [of motion smoothing] is that it makes most movies look like they were shot on high-speed video rather than film,” says Cruise, likening the results to the “soap-opera effect.”

McQuarrie agrees, saying, “If you own a modern high-definition television, there’s a good chance you’re not watching movies the way the filmmakers intended.”

I’m taking a quick break from filming to tell you the best way to watch Mission: Impossible Fallout (or any movie you love) at home. pic.twitter.com/oW2eTm1IUA

The problem is, most TVs come with motion smoothing already on by default, and turning it off often isn't easy, as manufacturers force customers to go through a series of menus, and oftentimes brand motion smoothing with custom names like Samsung's AutoMotion Plus.

It's also tricky to detect, according to McQuarrie: “Without a side-by-side comparison many people can't quite put their finger on why the movie they are watching looks strange.”

According to Cruise, filmmakers are working with manufacturers to change the way motion smoothing is activated on TVs to allow viewers to more easily access the feature and toggle it off if desired.

In the meantime, when installing a new TV, consider asking customers if they'd like the feature on or off, or find out if they plan on watching a lot of movies on that screen and turn it off for them. It's a nice way to be proactive and give customers the best viewing experience possible.

Alternatively, HDTV owners can take matters into their own hands and search “How to turn off motion smoothing [enter TV brand/model here]” and go through the necessary steps.

Cruise and McQuarrie won (mostly) kudos from the Twittersphere, and a lot of yuks.

@chrismcquarrie Not even Ethan can stand this kind of torture pic.twitter.com/Kd0alTpwYh

And the comments keep coming, now numbering more than 3,600:

It's so true. Doubly so for gaming. Switch that crap off 🙂 “Gaming Mode” is a great shortcut, if your TV has that option.

How bad has consumer video engineering become that @TomCruise has to tell @Sony, @Samsung, @LGUS, @panasonic how to do it? (@reedmorano said it first.) Also: Conveyance of metadata from program mastering to consumer display cannot yet be trusted; studio engineering is implicated.

YES!
Now please make a PSA about people that take vertical videos on their phones!!!

The first thing I do when I walk into any home is immediately turn off their TV's motion smoothing. The reaction is always like "thanks! I thought all of the movies I've been watching for the past 5 years have been looking odd"