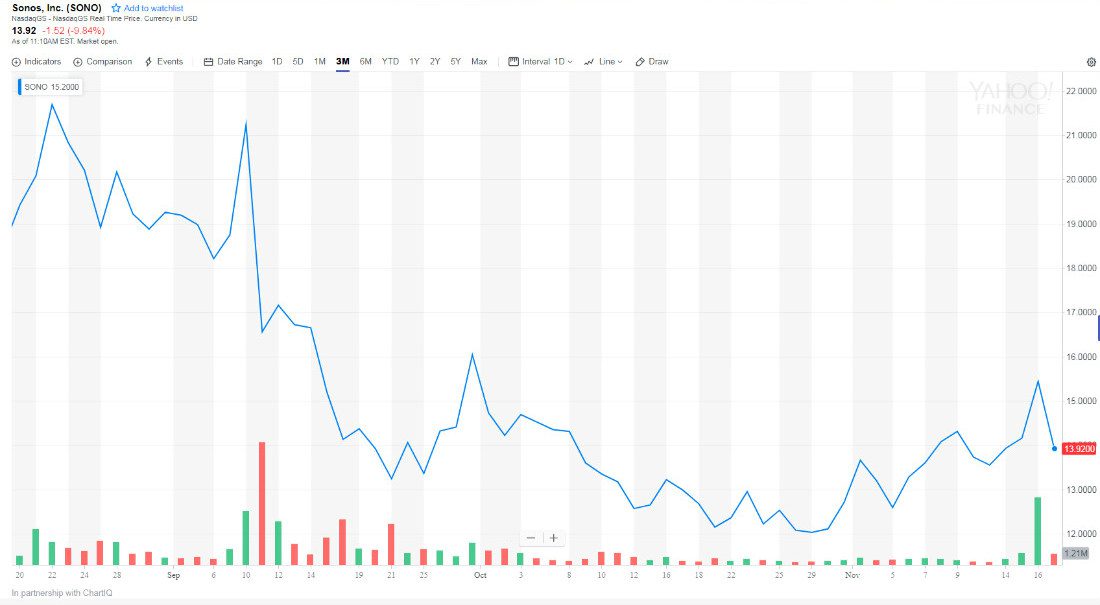 According to CEO Patrick Spence, the company's recent growth is due in part to sales of its Beam soundbar and by increasing its direct-to-consumer online sales.

Since going public, whole-house wirelss audio company Sonos (Nasdaq: SONO) has been on a rollercoaster ride. And after posting its record-breaking Q4 sales of $273 million, up 27 percent year over year, and forecasting strong 2019 sales, the company’s stock is on the move again.

For the quarter, Sonos also reported EBITDA of $20 million, up 343 percent from last year’s Q4. The company narrowed its quarterly net loss to $1.4 million.

Overall, Sonos speakers are now in 7.4 million homes. For the quarter, the company added 1.5 million more homes than in the previous year, representing a 21 percent growth. In all, Sonos sold more than 5 million products in FY 2018, up 29 percent.

“Beam has been our most successful product launch to-date. In just a few short months, Beam rocketed to the top of the charts.”
— Patrick Spence, Sonos

The stock market reacted quickly to the news, with Sonos stock rising as much as 24 percent on the day to $16.54 per share. But since then, sellers have returned and at press time the stock was back to the pre-announcement levels in the $13.70-range.

CEO Patrick Spence cited the new Beam soundbar as one of the key initiators of the growth, along with the direct-to-consumer sales channel.

“Beam has been our most successful product launch to-date. In just a few short months, Beam rocketed to the top of the charts, earning the number one position in dollar share in the U.S. soundbar category. That's unheard of for a $400 product,” he told investors.

Meanwhile, Sonos increased its direct-to-consumer online sales by 26 percent during the quarter. Spence also called out the partnership with IKEA as a notable one.

“For the first time we'll deliver an amazing sound experience without producing a 100 percent of the hardware ourselves. It's a demonstration of the flexibility and potential of the Sonos platform and an opportunity to really re-imagine sound in the home with one of the world's leaders in décor and design. Another example is Google Assistant which will be welcoming to the Sonos platform alongside the Amazon Alexa in 2019,” he said.