Whenever we make a big stink about some home automation system now working with an erstwhile un-integratable subsystem – Nest, Sonos, Apple TV, TiVo, Dish, DirecTV, Amazon Echo – chances are that Simple Control did it before anyone else. And chances are just as great that the company, formerly known as Roomie Remote, offers a richer two-way experience than anyone else.

I’d like to call Simple Control (or Roomie) the smart-home industry’s best-kept secret, but the company and the system are hardly unknowns. More than 60,000 customers have paid more than $10 each for the Simple Control/Roomie app. In 2015 it hit #132 in the Apple Apps charts for all categories (paid), and #2 in the Lifestyle category.

In the Lifestyle category, Simple Control competes not only with other home automation apps, but also more popular services such as Pimp Your Screen, BabyScope and Army Study Guide Portable.

Last year, Simple Control was featured in the #1 spot in Wired’s feature, “The Only Apple Watch Apps You Actually Need,” alongside such greats as Instagram and Tinder.

Integrator Dave Dalliafor, posting on CE Pro’s Linkedin page under an entry about an Apple TV 4 driver for Crestron, writes:

Want a great cheap solution that has the largest database and even works with Sonos and Bose … that a moron can program? (I know because I programmed my entire home in 20 minutes.)

Check out Roomie. Apps start at 29.95 for [controlling] 3 devices. Bottom Line: $89.00 will do anything and everything Crestron, Control 4, URC, Savant, etc., can do on any mobile device, and it works flawlessly!

Will Price, who founded Silicon Valley-based Roomie Remote in 2010, would concur.

“There’s nobody with an IP library like we have,” he says. “Ours may be 10 times as big as anyone else’s. And no one has the breadth and depth that we have.”

That’s not Price boasting. If he were a boaster, Google would have bought Roomie for $3.2 billion instead of Nest.

And he would be telling the world about his pedigree as a master cryptographer and his role in starting up Pretty Good Privacy, Inc. in 1996 with Phil Zimmermann, inventor of PGP, the most widely used email encryption software in the world.

A year later, PGP would be sold to Network Associates (later McAfee) for $36 million, and then spun out, and then sold to Symantec in 2010 for $300 million.

Price is a quiet computer engineer who does not willfully volunteer this information. He’s the definition of understatement. “Pretty Good Privacy” was rather excellent, and “Roomie Remote” is a whole lot more than a TV remote for the living room.

So when he describes“features” of Simple Control, it’s hard to recognize that some of these things are really big deals.

A few years ago at CEDIA Expo 2013, the big trade show for home-technology integrators, Price showed me a user interface that included an interactive electronic programming guide (epg) from which users could play and record TV content, all from within the Roomie app.

“We’re the only ones who can do this,” Price said at the time.

I probably patted him on the head and said something like, “That’s nice dear,” not really understanding the uniqueness of this powerful feature.

He also told me at the time (I still have my notes from the show) that Roomie could auto-discover IP-enabled devices on the network using not only established (and published) protocols like UPnP but other mechanisms unique to Roomie. 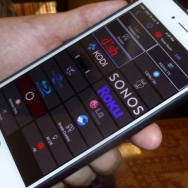 Again, I probably feigned an “I’m so impressed,” not realizing at the time that I was in the presence of a genius with multiple patents to his name, with titles like, “Apparatus and method for facilitating encryption and decryption operations over an email server using an unsupported protocol.”

So, yeah, Price and his products can auto-discover IP devices on the home network.

Fast-forward to 2015 when I visited Simple Control at their headquarters (understated, of course) in Los Altos, Calif. Now Roomie exploits nine different protocols to discern products based on their unique IP signatures, and automatically register them into a home-control system.

“We know not only that it’s a TiVo, but what kind it is,” Price says. “We have the largest auto-discovery library.”

In fact, Simple Control captures and aggregates so much data from IP products that it often presents information that the manufacturer itself does not expose.

For example, with Apple TV, Simple Control exposes “everything related to the media guide,” according to Price.

In one screen, for example, you can operate the controls of Apple TV, including keyboard controls, and enjoy feedback including such novelties as the amount of time left in a video and a list of movies you’ve already purchased.

“It even tells you the name of the scene you’re in,” says Price. “Even Apple doesn’t have this.”

In fact, for most media players and services, metadata from Simple Control is richer than the original vendor presents.

That’s because Simple Control integrates data from different Internet services, but also because the company has deep relationships with product and service providers.

Companies like Dish and TiVo “let us in at the deepest level,” Price says. “Others use published APIs but those APIs don’t give you everything.”

For those IP products that seem to be impenetrable, Simple Control always seems to find a way to extract the necessary commands for device control and feedback.

Simple Control (Roomie) was doing Nest, Sonos and Apple TV before anyone else was doing it. Today, the same can be said of Samsung smart TVs, which generally defy integration.

“No one else is doing it,” says Price of the Samsung integration, which includes volume and channel controls with feedback, mouse and keyboard emulation, as well as access to embedded Samsung services like Netflix.

With its ability to control and cross-pollenate a huge variety of IP-enabled media devices and services, Simple Control may well have the most capable media solution anywhere.

The capabilities continue to expand with universal searches that combine OTT (over-the-top) streaming services with traditional TV content through TiVo, Dish and DirecTV.

Search for any particular show, and Simple Control will not only scour through streaming services, but also through your DVRs for recorded content. In addition, it will look ahead in the EPG to let users know if the show will be offered in the future, in which case the user can set the DVR to record.

While Simple Control started out as a virtual universal remote, the product offerings expanded quickly to include home automation and related services.

Here again, the company has led the pack in many areas, including voice control via Amazon Echo. Now Simple Control is incorporating beacons into its ecosystem – something I haven’t seen much in home automation outside of Crestron (PinPoint).

At his home in the San Francisco Bay Area, Price walked from his office to the adjacent home theater, demonstrating how the smart-phone interface changed automatically based on its location.

After all, it seems silly to have to navigate to the “home theater” page when you’re standing in the home theater. Besides Crestron, the other smart-home vendors aren’t quite there yet. One day everyone will be doing it but, as usual, Simple Control is at the fore.

In terms of home automation subsystems supported, Simple Control has a good library, but not as extensive as A/V. Furthermore, the roster for IP control is a whole lot bigger on the DIY side than pro, with support (local or cloud-to-cloud) for such popular brands as Belkin Wemo, Philips Hue and Nest. It also supports DIY smart-home hubs such as Vera, Insteon, SmartThings and Lutron Smart Bridge for Caseta … along with any subsystems that those hubs support.

While plenty of home-technology pros deployed Roomie Remote when it was mostly a DIY-centric solution, there’s even more reason now to spec Simple Control for audio, video and whole-house control projects.

Although it captures many of the key partners on the A/V side (receivers, Blu-ray players, TVs, switchers, etc.), it’s missing some key integrations in the other categories, such as IC Realtime camera systems, traditional alarm panels and SIP telecom services. But they’ll get there. (See: Lessons from Roomie Remote.)

Since then, Simple Control has launched the Android-based Simple Hub ($270) that serves as command central. While the hub is certainly relevant for do-it-yourselfers, it is especially attractive to pros who are in the habit of selling hardware, especially hardware that is easily incorporated into the home network and the cloud.

Simply plug the hub into the network and it self-configures to connect securely to the Internet for cloud-based services and remote access. (Securely? Yeah, I’d trust the guy who co-developed PGP.)

Before it became Simple Control, the home automation software ran on the user’s own computer or PC appliance.

The hub includes Simple Sync software for automatically syncing the apps on all subscriber devices. Customers using their own host devices can purchase Simple Sync separately for $50.

Simple Control offers a $10 app for a fair amount of functionality, but most consumers – especially those who would hire an integrator – will opt for the ongoing Simple Service subscription for controlling 3, 20 or 100 devices for $20, $30 or $50 per year, respectively.

The service is required for the interactive programming guides, Apple Watch and Amazon Echo support, timers and triggers, remote access and more.

Most importantly for the custom channel, Simple Control has established a formal distribution channel with reps, dealer pricing and dedicated services. In Q1 of 2016, the company launched new turnkey products under the banner Simple System, exclusively for the integrator channel.

“These are Integrator-only products,” says Wohlford. “Our dealer agreement does not allow Internet sales.”

He adds that the biggest dedicated feature for this system is Remote Management, which “allows dealers to troubleshoot and make changes to client systems without running a truck.”

In June, Simple Control will activate this feature, which will be available as a free upgrade for all Simple System dealers. More dealer-only features are in the works.