Report: As Homebuilding Lags in the US, Remodeling Up 50%

A new report from the Harvard University Joint Center for Housing Studies suggests that, when compared to 20 years ago, both younger and older homeowners are now more likely to spend on home improvements.
CE Pro Editors 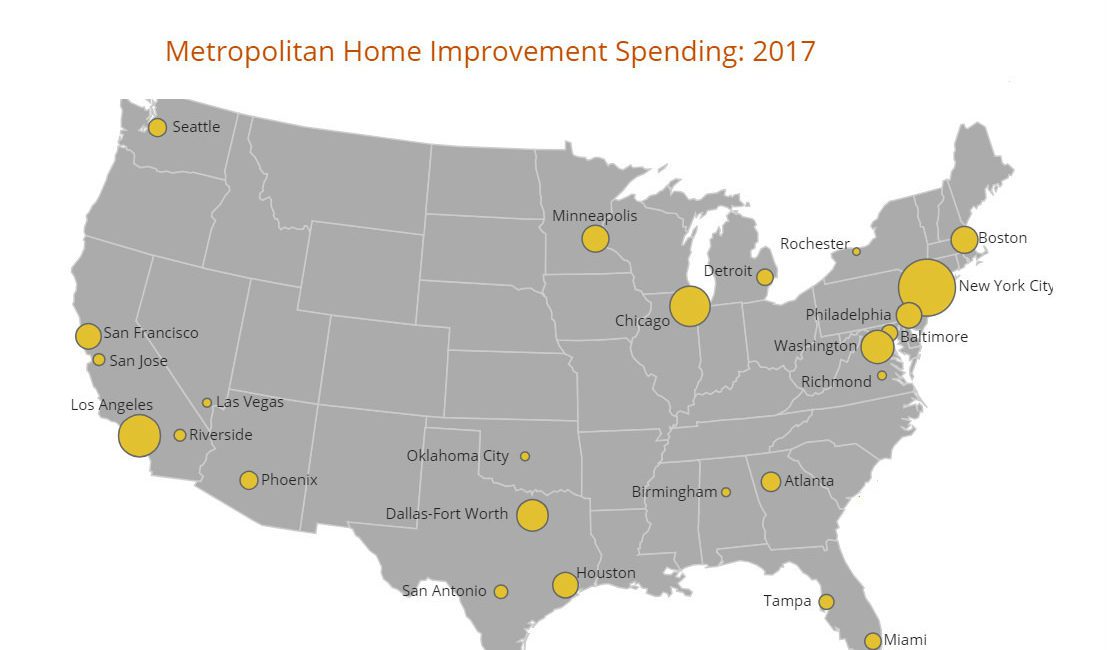 This image shows total homeowner expenditures on home improvements in select metropolitan areas in 2017. The larger the circle, the more spending. New York City leads the way with over $12 billion in spending.

Report: As Homebuilding Lags in the US, Remodeling Up 50%

The home remodeling market in the U.S. expanded by more than 50 percent since the end of the Great Recession, according to Improving America’s Housing 2019, a new report released today by the Harvard Joint Center for Housing Studies.

The report finds that, as homebuilding struggled to meet the nation’s growing housing needs, spending on improvements and repairs to both owner-occupied and rental properties hit a record of nearly $425 billion in 2017.

“With new construction slowly recovering from historic lows, 40 percent of the country’s 137 million homes are at least 50 years old,” says Abbe Will, associate project director in the Remodeling Futures Program.

“The aging of the housing stock has been a boon to the remodeling industry, with spending surpassing investment in homebuilding every year for over a decade, and contributing 2.2 percent to US economic activity in 2017.”

Spending on Home Improvements Up

“Over the next decade, the strong preference of older homeowners to age in place and the increasing difficulty of building affordable housing in many markets will continue to hinder the construction of new homes. The remodeling industry will therefore retain its critical role in helping the country meet its housing needs.”
— Kermit Baker, Harvard Joint Center for Housing Studies

The steady uptick in house prices in many markets and the aging population are also driving increased spending on home improvements and repairs.

Rising prices mean growing home equity, which provides owners both the incentive and the means to undertake more and larger projects.

Additionally, older households have higher homeownership rates than younger households, and many have the resources to afford major renovations, including accessibility modifications that allow them to remain safely in their homes as they age.

Households 55 and over account for half of all improvement spending by homeowners today.

Although younger households have struggled to gain a foothold in the homeownership market since the housing crash, the number of owners under 35 is finally showing signs of a rebound, and so is their remodeling spending.

In particular, younger households contribute significantly more to local improvement spending in many metros across the Midwest and the South, where owning is more affordable than in high-cost metros on the east and west coasts.

With homeownership recovering, almost 7 million rental and vacant units were converted to owner occupancy in 2016 and 2017, and their owners invested $50 billion in improving their condition. 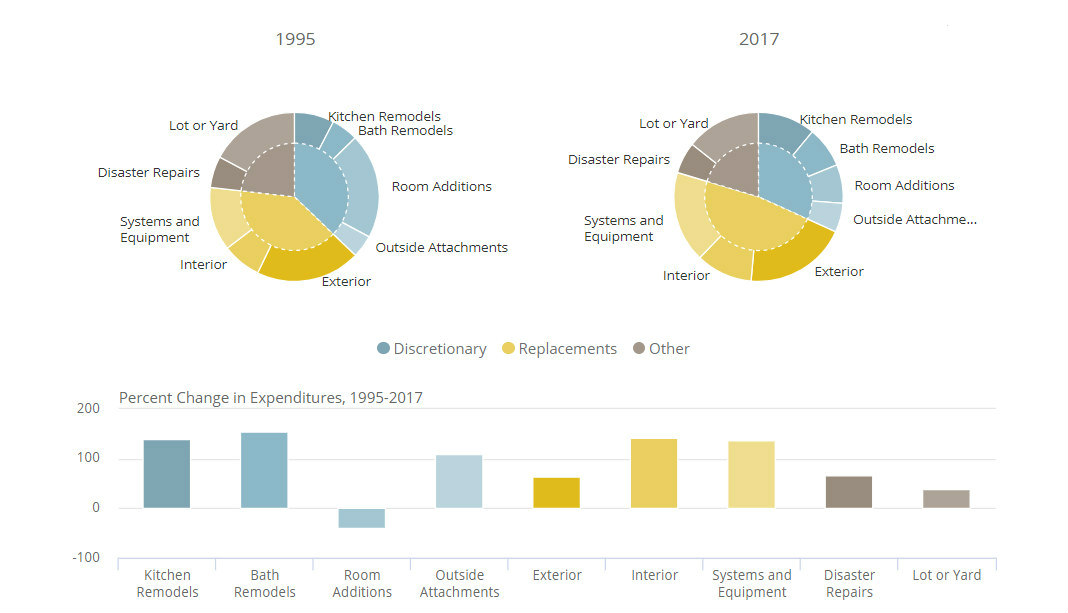 Homeowner improvement expenditures by project type. View an interactive version of this chart here.
To pay for home improvements, homeowners relied largely on savings, even for major projects; more than half of projects costing $50,000 or more in 2017 were funded by cash.

Expanding the ability of owners to pay for improvement projects over time—whether through home equity loans or lines of credit, cash-out refinances, or contractor-arranged financing—would not only generate considerable growth in the remodeling industry, but also help to preserve and modernize the nation’s aging housing stock.

“Over the next decade, the strong preference of older homeowners to age in place and the increasing difficulty of building affordable housing in many markets will continue to hinder the construction of new homes,” says Kermit Baker, director of the Center’s Remodeling Futures Program.

“The remodeling industry will therefore retain its critical role in helping the country meet its housing needs.”