McIntosh amps enabled Hanley Sound to innovate in the world commercial audio sound reinforcement through its amplifiers that were used to power the Woodstock sound system.
Robert Archer 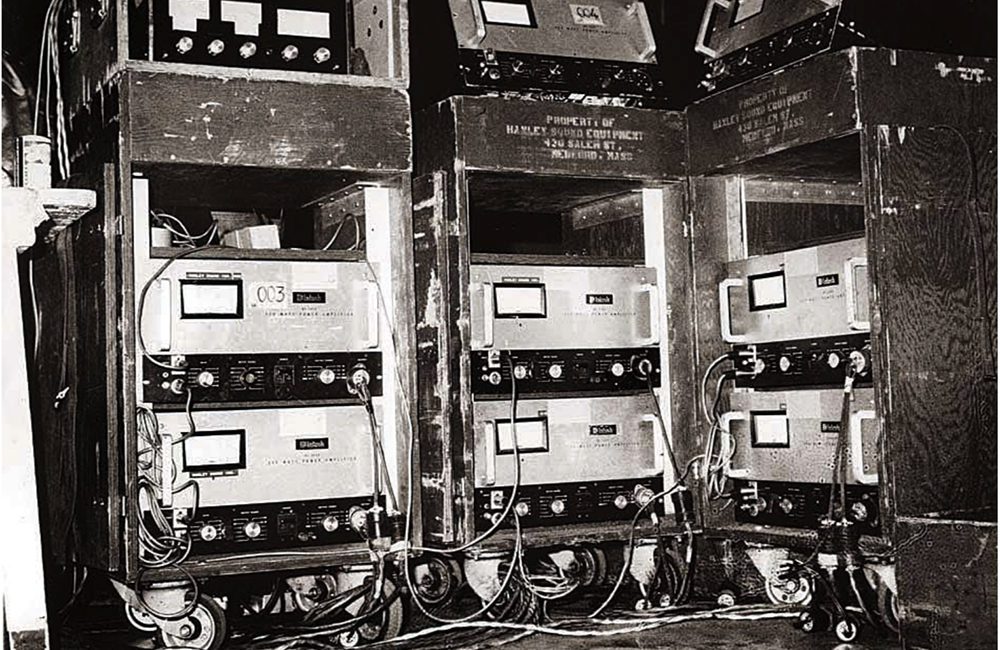 Hanley Sound utilized rack systems to house its inventory of McIntosh amplifiers, including the eight MC3500s and pair of MI200 amplifiers in this photo.

With the crowd drowning out the Fab Four, the music industry recognized the need for more than guitar and bass amps for bands playing large venues such as stadiums.

Working with Bill Hanley, a pioneer in the world of live sound, Hanley would design sound reinforcement systems that utilized McIntosh amplification for Woodstock and a few years later The Rolling Stones and Grateful Dead.

Known as the father of festival sound, Hanley founded Hanley Sound Equipment in Medford, Mass., and working with his brother Terry, the pair provided sound for a range of commercial environments.

In those early years of sound reinforcement, Hanley Sound would go onto provide sound for the Newport Jazz and Folk Festival, Woodstock, and famous venues such as the Fillmore East and the Boston Tea Party.

“Prior to Woodstock, for example, I had done the sound reinforcement for President Johnson’s inauguration in 1965 using McIntosh amplification. I was doing these kinds of things all the time, all of the anti-war movement stuff with large groups of people. So, we were the most experienced people that there were at the time.”
— Bill Hanley, Hanley Sound Equipment

In the book “Woodstock: The Oral History,” Hanley says that prior to the Woodstock show he received a call from Stan Goldstein, who was a record producer.

Hanley says Goldstein wanted to learn about providing the sound for a large show with a lot of people. Ultimately the show Goldstein was referring to turned out to be the Woodstock Festival.

“I got this call out of the blue from Stan Goldstein. He asked me how to do a big job with a lot of people. He was a recording engineer. I said we would take care of the job for him. That’s how we got involved. We pioneered the whole concept – we were the first people to put in large, high-fidelity-type sound systems with gigantic speakers and huge power amplifiers,” recalls Hanley.

“Prior to Woodstock, for example, I had done the sound reinforcement for President Johnson’s inauguration in 1965 using McIntosh amplification. I was doing these kinds of things all the time, all of the anti-war movement stuff with large groups of people. So, we were the most experienced people that there were at the time.”

When it came time to start the system design for the Woodstock festival Hanley points out the show organizers passed a Wallkill location. Meeting with Michael Lang at Max Yasgur’s, he along with the show’s organizers settled on the Woodstock site after considering several other locations.

Hanley explains the field was chosen because they were working with an estimated crowd size in mind and based on those estimates of 100,000 people, they decided to use Altec HIS 410s in horn-loaded 15-inch cabinets. Hanley tri-amped the Altecs with crossovers set at 50Hz and 8kHz, and Hanley Sound powered these speakers with a range of McIntosh products.

Another portion of the sound system was located high upon on a hill. Hanley says that’s why the towers were located approximately 60- to 70-feet above the crowd.

“We compressed the sound and that’s why I had designed a special speaker cluster to do that.”

Powering the towers, Hanley notes they used McIntosh amplifiers from his sound company’s inventory. Some of the McIntosh amps Hanley used include the MC3500, the MC275, the MC40 and the MC2105.

The company also kept McIntosh MC2225 amps in stock, but that model was popular with Hanley’s employees.

“The MC225 typically didn’t last more than a month on the shelf because somebody usually took them home for their Hi-Fi, and we never saw them again,” remembers Hanley.

“We couldn’t get the MI amps – Gordon [Gow] wouldn’t give them to us. Gordon decided that that was special stuff that the factory had to make maximum profit on.

Hanley Sound employee Harold Cohen states some of the reasons why the company preferred McIntosh amps were their build quality and ability to run flat from 20Hz to 20kHz.

According to Hanley and Cohen, the one modification the company did make to the McIntosh products was to replace their power supplies to enable the products to remain stable while producing higher levels of peak power.

Another aspect of Hanley Sound’s approach to providing sound in big show environments was the use of directional speakers.

Placing speakers in locations where the crowd positioned helped the company to manage sound levels to ensure even coverage across the listening area.

Moreover, Hanley and his staff employed multiple compressor limiters that helped the company to control sound traveling long distances through the limiting of dynamic range.

“If you were setting up a large speaker system, such as what we had there without having some form of compression, the people in the back would never hear the soft passages, only the loud passages,” notes Hanley.

“So, consequently, what you needed to do was to remove the dynamic range.”

Comparing the system used for Woodstock to modern systems seems unfair, but Cohen says his company was breaking new ground with the design of its solutions and they had to use the best equipment that was available to them at the time.

“The system was approximately 10,000 watts RMS into 8 ohms. The equivalent today would be 125,000 to 150,000 watts. There weren’t 10 companies in the country like there are now that would be capable of being able to amass that kind of power,” adds Cohen.

“We did all of this using equipment owned by Hanley Sound. We didn’t pool it with five other companies. And we had not only the main stage covered, but we also had small systems available for the puppet theater and also the other free stage that was to be set up at Woodstock, even though the sound systems were never erected on those stages.”