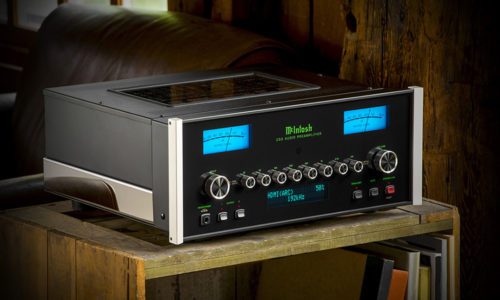 McIntosh says the C53 preamplifier carries an MSRP of $8,000.

Merging the worlds of home theater, streaming media and traditional stereo, the new McIntosh C53 preamplifier offers a wealth of connection options to support the many ways people consume audio.

McIntosh says that its latest preamplifier builds upon the features of its current generation of solid-state integrated amplifiers through the addition of a new digital audio module.

The C53 is the first McIntosh product to incorporate its DA2 digital audio module. This module offers two coaxial, two optical, one USB, one proprietary MCT connection for use with McIntosh MCT series of SACD/CD transports, and an audio-only HDMI Audio Return Channel (ARC).

According to the N.Y.-based manufacturer, integrators can use the HDMI ARC option to enhance the sound of standard TV audio by converting Dolby– and DTS-encoded audio content to stereo for playback through the C53.

McIntosh notes the C53 also supports CEC communication to allow for control of the TV and preamp and features such as TV volume and power.

Enabling the support of high-resolution content is a quad-balanced, eight-channel 32-bit digital-to-analog converter (DAC) that is at the heart of its new DA2 digital audio module.

On the analog side of the home audio market, the C53 preamplifier includes nine inputs for a total of 16 digital and analog input choices.

The C53's analog inputs include three sets of balanced (XLR) and four sets of unbalanced (RCA) connections. McIntosh also includes moving coil (MC) and moving magnet (MM) phono inputs for use with turntables equipped with either type of cartridge.

McIntosh emphasizes the unit's High Drive Headphone Amplifier can effectively drive any set of headphones, and its Headphone Crossfeed Director (HXD) option “can bring an added dimension to the music.”

Moreover, further supporting the preamplifier A/V capabilities, integrators can use the C53's Home Theater Pass Through to integrate the preamp into home theater systems.