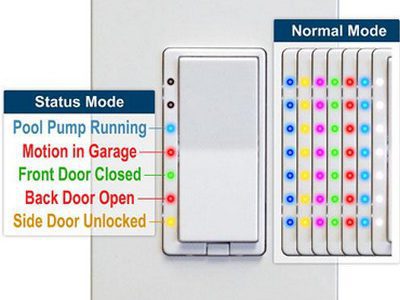 It's CES season, so all the newfangled home automation companies and products are coming out of the woodwork. We forget sometimes that there are companies like Homeseer that have been around for ages and continue to produce useful smart-home products that actually ship … and work.

The latest innovation is Homeseer's 200 Series Z-Wave dimmers and switches that double as home-automation indicators. A bank of 7 multicolored LEDs framing the paddle can be programmed to light up or blink any color based on whatever the users want to know.

Flash them all red in the event of a fire. Keep the blue indicators on at night, turning them off when the teenager comes home. Or assign each of the LEDs to different devices or modes, and know at a glance if the garage is opened or closed, or if the side door is locked.

The full press release is below.

HomeSeer's new smart home wall switches, dimmers and fan controllers are equipped with multicolored RGB LEDs that respond to wireless Z-Wave commands. This allows homeowners to control the color of each LED or switch based on their personal preference or based on the changing status of things in their home.

In normal mode, wall switches glow to reflect the status of each circuit using a palette of 7 possible colors. Colors can be set once and left or can be programmed to change every day or on holidays, birthdays and other special events.

In status mode, individual LEDs can be controlled to reflect the status of nearly anything in the home. If it's after midnight and the garage door was left open, specific LEDs can be programmed to glow yellow (or any color). If a smoke alarm goes off, all LEDS on all switches can blink red. If no status conditions are active, wall switches automatically return to normal mode.

“For many years, smart home switches all did basically the same thing in the same way” says Mark Colegrove, HomeSeer's Director of Sales. “We changed that in 2016 by adding multi-tap scene triggers to our 100 series line. Our 200 series raises the bar even higher by offering a wall switch that functions as a scene controller and a multi-colored status indicator”.

HomeSeer Technologies LLC is a leading provider of smart home systems based in Bedford, New Hampshire. Its products are designed to work seamlessly with most popular smart home technologies and other products available around the globe.

HomeSeer systems leverage the speed, reliability and security of locally-managed automation while tapping into the power of cutting-edge cloud-managed services such as Amazon Alexa, Google Home and IFTTT.