What to do without a Monster concert at CES 2019, sorting out the 24 Marketplace areas and other changes to maneuver.
Chuck Schneider 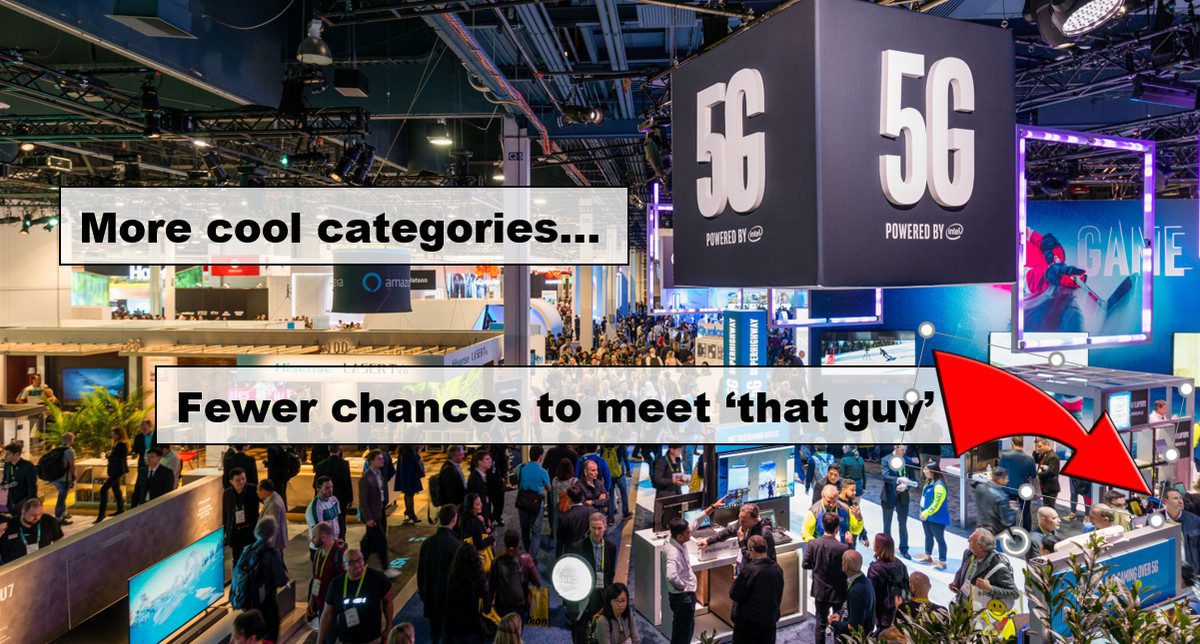 At CES 2019, you'll discover more cool categories than ever ... but you'll have to fight bigger crowds to do so.

As the holidays zip past this time of year, many of us in this industry turn our attention to one last event before settling in to the routine of the new year—the Consumer Electronics Show (CES 2019) and once simply referred to as “The Show.” It’s also the time of year when those of us old enough to be on Medicare and/or accomplished enough to become CE Pro Masters wax nostalgic about a week in January from the past that will never return.

With all candor, my friends and I did things in the desert winter that you’ll not likely ever even have an opportunity to turn down. CES included lots of fun and some unusual activities that had little to do with actual business.

As I’ve written in the past, there really was an off-site vendor display at a Caesar’s penthouse suite during business hours where cocaine was served as casually and openly as mixed nuts. And it’s equally true that a prominent northeast stereo store owner treated his crew to an all-expenses paid trip to the Chicken Ranch.

Today, the show is much different. Here are six big ways CES has changed.

It Is Way Bigger

The geographic size of the show is immense. If you attend CES 2019, you really need to devote more than just one or two days. There is simply too much of importance to see. Input “CES” and “big” into Google and you’ll get multiple pages of stories regarding the size of the show, written by everyone from local Vegas newspapers to CNET to Forbes to scores of smaller tech bloggers.

“Alas, it’s been announced that for the first time in decades, there is no Monster concert—neither cult act nor superstar—at CES 2019.”

It wasn’t always that way. As attendance rocketed from a shade under 100,000 to nearly 200,000, the number of venues jumped from two (the Las Vegas Convention Center and adjoining Las Vegas Hilton) to 11 official CES sites.

There was a time you could walk the entire show in one or two leisurely days. No more. Fortunately, shuttle buses now run continuously between venues, but just make sure you know which venue is part of Tech East or Tech West. Waiting in lines for the busses can cause some stress, especially as they squeeze onto Paradise Road to maneuver in traffic that rivals rush hour on L.A.’s 405 Freeway for 15 hours a day.

The Monorail is an option also. This recent contribution to the Vegas public transportation system is probably seldom used 361 days per year, but over four days in January, it looks like Manhattan’s A train leaving Penn Station at 5:30 p.m. So build in some time if you want to make all your appointments.

One last, somewhat metaphoric, point as to the growth of today’s CES compared to yesteryear—the size of the printed official CES Exhibitor Directory. At one time it was little more than a pamphlet actually bound together by staples. Today it rivals a hard cover edition of Lord of the Rings. Its sheer heft starts to weigh you down as the day draws to a close.

For years in the directory, TV maker Sharp was immediately followed by microphone/phono cartridge/headphone vendor Shure. When you pick up the 2019 edition, count how many exhibitors—most all beginning with “Shenzhen”—are between those two old-guard vendors. (Spoiler alert… it’s more than 400 separate companies… and some people still scoff at international trade imbalances!)

The Demos Are Less Frequent

With the big crowds, getting a private and personal demo is not easy as it used to be, but the demos are still there to be had, especially in the high-performance audio suites on the 29th. 30th, 31st and 35th floors of the Venetian, where vendors like AudioControl, Lenbrook, Bowers & Wikins, eero, Onkyo, SVS, Sound United, AudioQuest and others will be.

In days past, there was an entire huge section just off the main showfloor in LVCC Central Hall dedicated exclusively for listening, watching or put your hands around something new.

No More Buying on the Showfloor

CES of yesteryear was the golden era for NATM, then the 800-pound gorilla of a buying group that included Best Buy, Circuit City, Highland, Sun and Lechmere among other powerhouses. The founder and 30-year executive director of the group, then-nicknamed “Forty Thieves,” was CTA Hall of Famer Saul Gold, one of the best business minds I ever met. Gold, who maintains an active Facebook page as he approaches 90, used to speak of CES as “going to market.”

And that’s what we did. Armed with purchase orders and sharp pencils we’d choose the assortments, negotiated the price and any other off-the-sheet allowances, schedule deliveries and took full advantage of every vendor’s “show specials.” Those deals were, like a Wal-Mart Black Friday TV, limited in time. Plus, they really had to be bought during the show. Prior-year model closeouts were also announced at the show and were absolutely first come-first served. It was wild, exhausting and a lot of fun.

Today, there is very little, if any, actual buying done in Vegas. Much of that is driven by tax laws against actual monetary transactions taking place on the showfloor.

On the last day of the show up until recently, we’d reserve a few hours to explore the area with all the small booths looking for some diamonds in the rough. We used to call that section, mostly populated with 10- by 20-foot booths adorned with little more than one or two draped tables, “The Jungle.” Though it was pretty much nothing more than row after row of fledgling foreign distributors and parts suppliers, there were the occasional pleasant surprises.

Steve Wozniak, co-founder of Apple, debuted his CL-9 remote control range extender company in The Jungle and I’m almost certain that high-end home speaker manufacturer Thiel got its start there as well.

And I vividly remember a small booth manned by two Southern Californians with a table full of black-and-white TVs. The guys’ badges said their company was Lucky (the “L”) Goldstar (yup, the “G”). That same conglomerate today has a CES booth massive enough to land a squadron of helicopters.

At 6 p.m. on the end of the first day, about 1,200 founding members of today’s CE industry would head to the 25th floor of Bally’s for the annual Professional Audio Retailers Association (PARA) Party.

The brainchild of then PARA executive director and charter inductee to CE Pro Masters Deborah Smith, this was the event to be seen attending on the first evening of CES. No stage, no roundtable discussions, no awards—just free booze, excellent munchies and a chance to network with what was then nearly 1 percent of the show’s overall attendance. Today, there are hundreds of receptions every evening of CES.

What about night number two at CES? Few would disagree that Noel Lee’s invitation-only Monster Cable awards concert was the can’t miss event of the evening.

I, along with many others, feel that Lee’s early shindigs during the late 1980s and the mid-1990s were more fun and less stressful than his huge extravaganzas of later years.  The venues were more intimate, the invited guests were fewer and the talent was more esoteric—often featuring acts from direct-to-vinyl record label Sheffield Labs. Artists like Amanda McBroom, Tower of Power and Dave Grusin played to an audience of nerdy audiophiles (like me) who owned two copies of every Sheffield title—one to play and a factory sealed copy for investment purposes.

If Lee didn’t invent the trade show concert, he darn well perfected it. Every year, according to former staff, he felt the pressure to outdo the previous year and outshine any vendor copycats. The likes of hi-fi fav Thelma Houston gave way to the national headliners including Stevie Wonder, Fleetwood Mac, Diana Ross and John Legend who played to crowds of over 5,000.

Alas, it’s been announced that for the first time in decades, there is no Monster concert—neither cult act nor superstar—at CES 2019.  Wow.

That means integrators are free to get to the CTA Mark of Excellence Awards reception. This custom electronics-focused evening draws the top integrators and a swath of custom-focused manufacturers for a fast-paced awards presentation (with cocktails and hors d'oeuvres). The MOEs are from 6  p.m. to 8 p.m. at the Venetian Resort and Hotel, second floor, Bellini Ballroom 2003/2004.

If that doesn’t suit you, you might as well just grab an animal style In-N-Out burger and fries at the drive thru, go back to your room, pack, head to McCarran and go home. Maybe play some video slots while you’re waiting. It’s said that Terminal 3 has the loosest machines.

Whether you depart sometime during evening two or any time throughout days three, four, or—God help you—the morning after the show ends, you are in for an excruciating nightmarish airport experience. It’s not the fault of the trade show. From 1981, the first year CES was held in Las Vegas, to 2018 Clark County’s population grew from under 500,000 to over 2.2 million.

They could build terminals on top of terminals and still couldn’t handle all the travelers venting their frustrations in 100 foreign languages. Suffice it to say, leaving Sin City was a significantly smoother process in the old days before this exponential growth and the arrival of the dreaded TSA.

It really was a simpler time… at CES and everywhere else.