While millions of people will enjoy the upcoming Super Bowl, very few know what it takes to put on such a massive event. Here's an inside look.
Alex Kirillov

The biggest production of the year in the U.S. is the Super Bowl. No event captures the attention of the public like the battle to crown the newest NFL champions and the hosting venue has to have the best equipment available to make the show special.

But there’s more to it than just installing big TVs around the stadium hosting the game, including Hard Rock Stadium in Miami for Super Bowl LIV on Sunday night.

AV integrators have the tough task of making sure all the audio and visual equipment works well together with other systems and provides the best possible experience for those in attendance.

Let’s take a closer look at how much has been put into Hard Rock Stadium to make the Super Bowl rock.

Hard Rock Stadium opened in the fall of 1987 as Joe Robbie Stadium. In its 33 years of its existence, the building has gone through several iterations, owners and name changes.

The most extensive renovation was the $350 million renovation completed in 2016 which drastically overhauled the look of the venue, reduced the number of seats to accommodate more luxury boxes and of course introduced massive audiovisual improvements.

From an AV standpoint the most noticeable additions for fans at Hard Rock Stadium are the four 49-foot x 111-foot (the equivalent of a 1,461-inch TV) Daktronics DVX-1102 HD LED displays placed in the corners of the stadium. 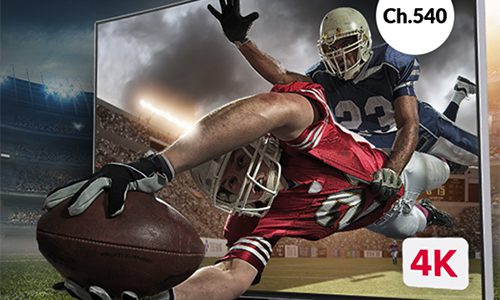 In 2018, a more modest 39-foot x 90-foot video board marquee was added to the exterior above the entrance to the park. This was followed by the addition last year of the longest continuous LED ribbon display in professional sports, wrapping itself around the seating area inside the venue.

The ribbon display is Daktronics RTX-1103 series, the same as the exterior marquee except it is 2,105 feet long by 3.5 feet high.

For sound, Hard Rock Stadium relies on an audio system made up of more than 3,000 loudspeakers. The system is made up of Electro-Voice and Bosch speaker equipment, including 186 XLCi-127DVX line array elements, EVF-1122S front-loaded speakers and EVH-1152D long-throw loudspeakers.

For audio in restrooms, offices, luxury suites and public areas, there are 1800 ZX1i loudspeakers and over 1000 EVID ceiling mounted speakers.

Putting It All Together

If you think mounting your new flat screen in your den and setting up your surround sound system is hard, imagine the undertaking of integrating 3,000 speakers and five massive video boards.

There are endless amounts of complications and concerns beyond simply plugging things in and making sure they turn on. It requires a lot of custom work and creative problem-solving from professional systems integrators to get a stadium Super Bowl-ready.

One of the hidden concerns for installing large amounts of video equipment is electromagnetic interference (EMI). Every electronic device emits some amount of EMI, but oftentimes the bigger devices produce the most interference.

You can imagine then that the four 1,461-inch TV screens inside Hard Rock Stadium could emit quite a bit of EMI.

The big concern with EMI pollution is for fans in the crowd as it could significantly affect their ability to connect to their mobile networks. The concern is so real that the NFL created minimum Wi-Fi and cell standards accommodate fan connectivity needs.

When Daktronics was tasked with installing the new screens in the Hard Rock Stadium, EMI had to be a major consideration. Daktronics’ screens are designed to have interconnected circuits and components to limit the amount of EMI.

The products are also tested in house in an EMI chamber and certified by a third party for EMI certification of compliance.

Audio components are even more difficult to integrate into a 65,000-seat stadium. EASE modeling and intelligibility plots were used to appropriately place speakers for even coverage. The audio network uses Audinate’s Dante networking protocols to interface with the disparate proprietary network protocols.

This is so things like the Yamaha CL5 FOH sound mixing console can be linked with the other components and the signal can be transported over a converged network.

Even until recent times, most stadium network audio solutions were not integrated into the venue’s network infrastructure. The Hard Rock Stadium took a “converged network” approach which has the audio infrastructure build off the core switch infrastructure in the stadium’s data center.

The audio network infrastructure also had to be able to accommodate any and all audio requirements including bowl sound, paging systems, PA systems and emergency notification systems.

Having a converged network means that all these systems must share the same broadband network infrastructure as other data channels such as the point-of-sale network and the IPTV system.

It is a colossal undertaking making sure our sports cathedrals provide the best experience possible for fans, but AV integrators are the figures behind the scenes making it happen.