Autonomic is recognized as a leading manufacturer of complete whole-house music systems. As innovators with a core competency for audio and control, Autonomic offers the ultimate standalone entertainment solution that is feature complete and compatible with popular control and home automation platforms. With an award-winning lineup of media servers, multi-room amplifiers, an intuitive app for Apple and Android devices as well as elegant, designer friendly in-wall keypads, Autonomic products have become the standard for merging local music collections and the most popular online streaming services such as Pandora®, Rhapsody®, SiriusXM, TuneIn Radio, Slacker Radio, Napster, Spotify, TIDAL, Murfie, and Deezer to be enjoyed throughout the home. 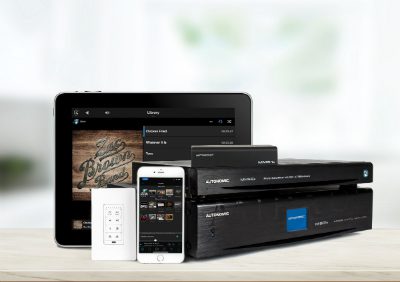 Make the most from the Mirage eSeries with eAudioCast™ for flexible, profitable, decentralized multi-room music.

3 Big Things You Might Not Know about Autonomic eSeries

Take the virtual tour of Autonomic’s CEDIA booth and check out its new eSeries lineup of whole-house entertainment players and amplifiers.

Streaming Music Services – They’re Not All the Same

How to assemble and deliver a satisfying portfolio of music services.

The Art of Music in Its Highest Form

Enjoy an audiophile music player without giving up the features and functionality that make it true whole-house entertainment.

This Advantage Series White Paper breaks down UV technology, explaining the pros and cons and how integrators can take advantage of the platform by offering conversion services for clients.

View all on Autonomic