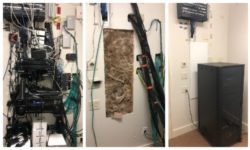 Montana Integrated Living fixed this client’s frustrating system by installing a new network, rewiring the rack and retrofitting the theater.

Throwback Thursday goes back to 2011 when Amenitek redesigned an A/V system in an 18,000-square-foot log cabin that featured two 7.1-channel surround-sound rooms, three 5.1 surround rooms and 12 zones of audio.

A 12,000-square-foot home is retrofitted with URC’s Total Control to provide audio to 10 separate zones lighting and control the audio/video. All this was done while maintaining the home’s aesthetics, which was a major concern for the homeowners.

Fess Up: How Bad is Your Equipment Cabinet?

After seven years, our structured wiring, home automation and and A/V rack are a mess! What’s in your own closet?

A huge rat’s nest, a panel screwed up by the cable guy and a Crestron lighting system struck by lightning.